It’s A Sin: Peter Tatchell speaks with cast members about the power of community 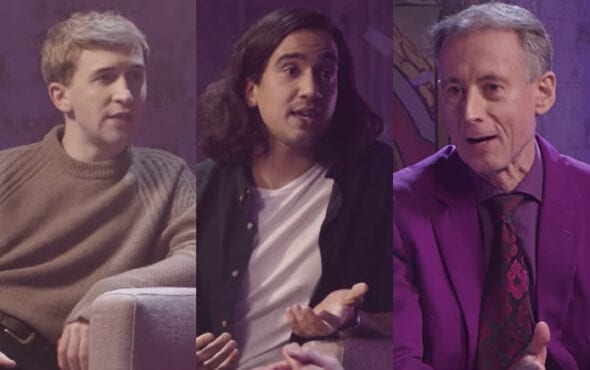 Nathaniel Curtis and Callum Scott Howells, stars of Channel 4’s new drama It’s A Sin, have sat down with leading LGBTQ+ activist Peter Tatchell to talk about finding your queer family and the power of community when fighting for LGBTQ+ rights.

Nathaniel plays Ash and Callum plays Colin in the new five-part Russell T Davies show, with their characters each facing their own challenges growing up gay in the 1980s.

In the face of tragedy, the characters each play a part in trying to better understand the new deadly virus that had appeared in London and came up against the horrors of how mainstream society turned on their community as the HIV/AIDS epidemic unfolded.

Peter Tatchell has a legacy of activism and campaigning since the early 1970s, and was one of the leading voices for LGBTQ+ rights during the HIV/AIDS crisis.

“It was a lightning bolt of joy to find a movement that existed that was fighting for my rights and our rights,” says Peter about finding his tribe when arriving in London.

He adds, however, that attitudes towards LGBTQ+ people during the decade deteriorated and they faced abuse and discrimination from the highest offices in the UK. “We were effectively designated as the enemy within,” he recalls.

You can watch Nathaniel and Callum’s conversation with Peter Tatchell below: