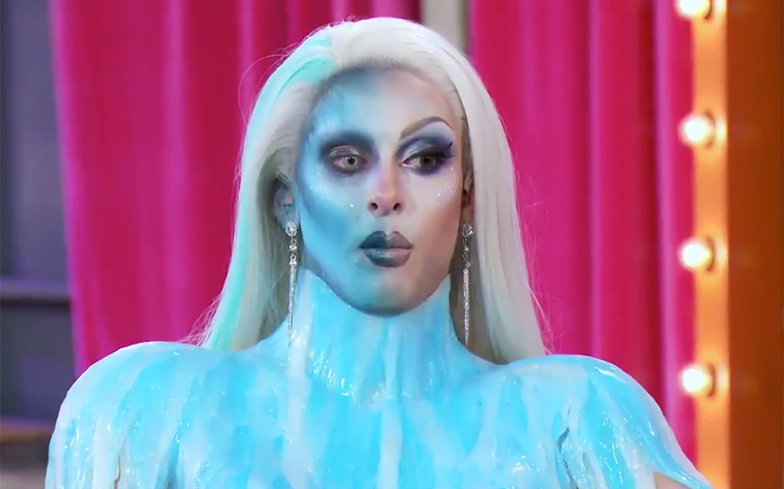 It definitely wasn’t RuPaul’s Best Friend Race on this week’s episode of Untucked.

This week, the 10 remaining contestants showcased their wit (or lack of) for the show’s staple challenge: Snatch Game. Some were iconic, and some were… remember Kenya Michaels’ chaotic and downright bizarre impersonation of Beyoncé? Yeah. Like that. Don’t get it twisted, Kenya’s B was iconic. But it was one of the most unsettling pieces of art (?) we’ve ever witnessed.

After playing the Snatch Game and sashaying down the Frozen-inspired runway, Gigi Goode, Jackie Cox and Sherry Pie won unanimous praise from Ru and the panel for their bonkers (yet accurate) impressions of Maria the Robot, Lisa Rinna and Katherine Hepburn, while Aiden Zhane’s Patricia Quinn, Brita’s Jennifer Holliday and Crystal Methyd’s Poppy were panned.

Following their critiques, the top and bottoms joined the safe queens – and like last week, it wasn’t long before Jan (who should’ve earned more screentime for her brilliant impersonation of Bernadette Peters) started thumping the Shade button.

To the surprise of no one, Aiden was called out by her fellow competitors. Gigi told her that she lacks drive, which led to Brita – who opined in her confessional moments before that Aiden has been “lazy” throughout the competition – chiming in and expressing disappointment at her performance in the series so far, due to her NYC Entertainer of the Year gong.

(Please remember that Brita apologised for her behaviour towards Aiden in last week’s Untucked and assured fans that they have reconciled since filming, so TRY and be a good person and refrain from sending hate to any of these queens.)

Sherry then hit out at Brita, saying her reputation in NYC is “an excuse” for her underwhelming performance, before Jackie criticised the bottom queens for their Snatch Games because it’s the “challenge we all had the most time to prepare for”. Urm. are the Snatch Game producers paying Jackie’s bills? Whatever the case, we stan! More of this Jackie, please!

“We prepared for it, but sometimes in the fucking moment, you can’t be prepared,” responded Widow Von’Du. “I worked on my Snatch Game characters for the longest time, but when it’s in the moment, you never know what the fuck is gonna happen.” Widow’s remarks then led to a rather civilised debate with Jackie and (a heavily edited out) Sherry.

For the second week in a row, Heidi N Closet jumped to the defence of one of her fellow queens. We stan Heidi, full stop! It was short-lived thanks to Gigi, who we 100% believe had the best of intentions, reminding Heidi that she has been told by the judges to “improve her face”. (In week one, Nicki Minaj told the performer that she “hates” her makeup… it was quite harsh.)

Understandably, Heidi felt like Gigi’s comments were a “slap in the face”. We love Heidi and we love Gigi and we don’t want them to fight. This HURTS! After shantaying to the back of the room, a depleted Heidi expressed to Widow: “I’ve been the underdog since day one. I’m tired of it. Fuck my drag, right? I’m tired of these fucking bitches.”

Annoyingly, Gigi and Heidi’s potential reconciliation was thwarted after Snatch Game guest judges – and Mean Girls stars – Daniel Franzese and Jonathan Bennett reared their heads to remind the queens they are not participating in the 12th season of RuPaul’s Best Friend Race, and to “keep the eye of the tiger”. It was awkward AF. Great TV though.

You can watch the sixth episode of Drag Race Untucked in the United States on WOW Presents and Hulu. Unfortunately, it won’t be available to stream in the UK until later this year. In a statement on Twitter, a representative for Netflix said: “It’s looking like Untucked will arrive all at once at the end of the season – sorry! We’ll keep you updated if that changes.”