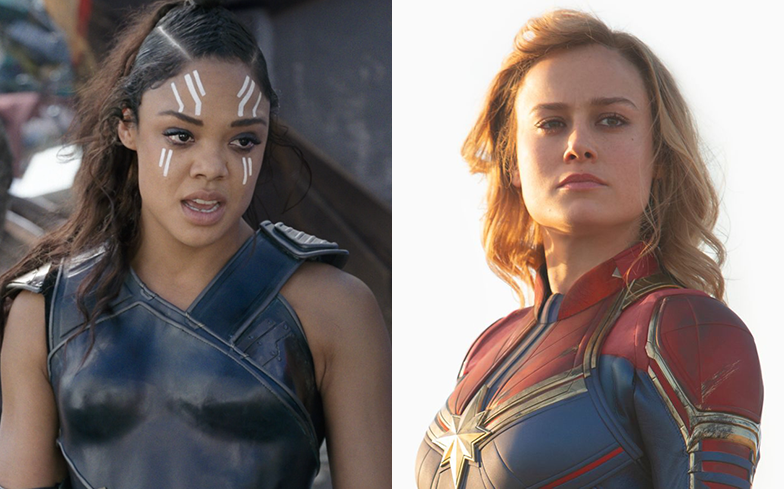 Illustrated by Bev Johnson, the picture sees Larson’s character mid-air holding onto the Thor: Ragnarok superhero (played by Tessa Thompson), as they stare into each other’s eyes with infatuation.

Larson tweeted the photo alongside the caption, “We cute” to which Thompson responded: “WHAT. We so cute.”

Fans have championed for Larson’s character to be gay ever since the release of Captain Marvel – the first female solo adventure in the Marvel Cinematic Universe – after noticing queer undertones in the blockbuster. In the film, Captain Marvel, aka Carol Danvers, discovers how she became one of the galaxy’s mightiest heroes after Earth is caught in the centre of a galactic conflict between opposing alien races.

During her mission to find out more about her past, she comes across fellow Air Force pilot, Maria Rambeau (Lashana Lynch), one of her oldest friends. Maria is a single mother, and we discover that Carol helped raise her daughter.

Fans were quick to ship them both as a couple, even though their romance wasn’t explicitly portrayed on screen.

However, because the film boasted several queer undertones – and Carol didn’t have a male love interest (thank god) – the LGBTQ community has declared them both as queer, and we are so here for it.

The Marvel Cinematic Universe has received backlash in the past for not including queer characters.

In an interview with Rolling Stone last year, Thompson revealed that she filmed a scene where a woman walks out of Valkyrie’s bedroom in Ragnarok, heavily suggesting that they had been intimate with each other.

Speaking to The Independent about the controversy that arose, Thompson explained: “One thing to clarify about that… is it was so in passing. I hope we get to that space, where someone’s sexuality is as immaterial as me drinking this green juice.

Thompson also spoke about the flashback scene, saying: “The woman that dies is her lover. In performance we were, like, ‘That’s your lover.’ So in my mind it isn’t cut; I played her as a woman that’s queer.

“I hope that we get to a space, in terms of the stories that we tell, where that’s something that gets to exist, and it doesn’t have to be noteworthy.” Although Deadpool 2 featured pansexual anti-hero Deadpool, and revealed that Negasonic Teenage Warhead and Yukio were in a relationship, those films don’t play a part in Marvel’s extended universe, which hasn’t featured an LGBTQ character in over 21 films.

However, Marvel has made sounds toward featuring LGBTQ characters in the future. Back in June 2018, the president for Marvel Studios, Kevin Fiege, confirmed that two LGBTQ superheroes would be making their ways to our screens, with one them being an already established character, comments that were echoed by producer Stephen Broussard back in August.

It’s speculated that Valkyrie could be the established character who is revealed to be LGBTQ, and if Marvel needs any help deciding what other LGBTQ superhero they could bring to the big screen, we’ve got a handy list right here.