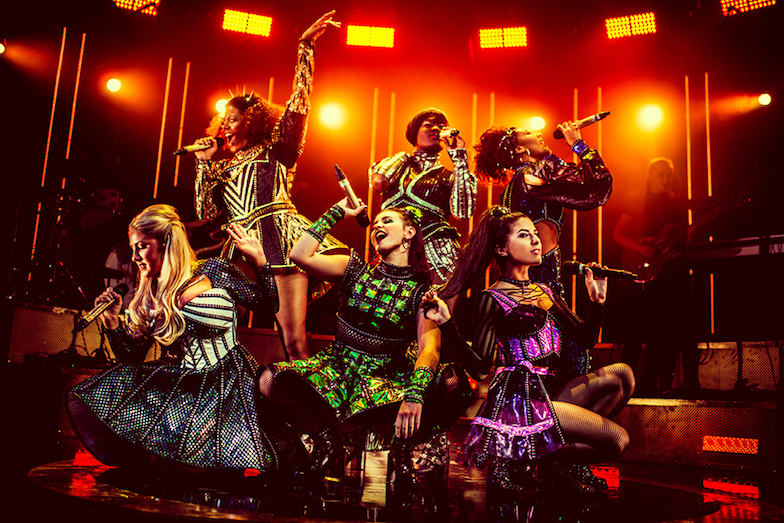 After sitting through over an hour of Six, you begin to wonder why the story of Henry VIII’s ill-fated wives hasn’t come to the stage before. Sure, it’s been mentioned in different ways here and there, but frankly nothing is quite so brilliant as this.

This one-act, six-strong female blockbuster of a musical turns history into herstory as the ladies compete in their very own live concert to find out who really had it the hardest when married to him. Y’know, the one with the beard. But, in true modern musical style, it’s anything but a throwback to times gone before as these ladies are belting out pop songs, rapping and kicking some serious glamorous ass. It’s basically like a night out with Gay Times, hun.

First coming to life as a university project by writers Toby Marlow and Lucy Moss, their creation voices six small pockets of history for the ladies that we all remember from our GCSE’s – each with a polite musical nod to a pop diva including Beyoncé, Ariana Grande, Sia and more.

But perhaps what makes Six such a success is the unapologetic positioning of women as they side step what has famously brought them together (Heny) and gives them voices rightfully all of their own. Their own being. Their own sound. Their own story.

But it’s not just the ladies on stage that leave you gagging for more. From sparkling glamour to slick corsets and some killer boots, Gabriella Slade’s costume design looks closer to a Vogue runway show than it does a West End musical, such is the excess on display here. Emma Bailey’s set design also that of the highest royal order.

Jarneia Richard-Noel (Catherine of Aragon), Millie O’Connell (Anne Boleyn), Natalie Paris (Jane Seymour), Alexia McIntosh Anna of Cleves, Aimie Atkinson (Katherine Howard) and Maiya Quansah-Breed (Catherine Parr) – remember their names as they’re about to become some of the biggest stars in the game thanks to Six.

Perhaps it’s about time we ripped up those history books once and for all as the future is female, and the future of British theatre is Six. The Olivier-nominated musical is now playing in London’s West End, and long may the ladies reign.