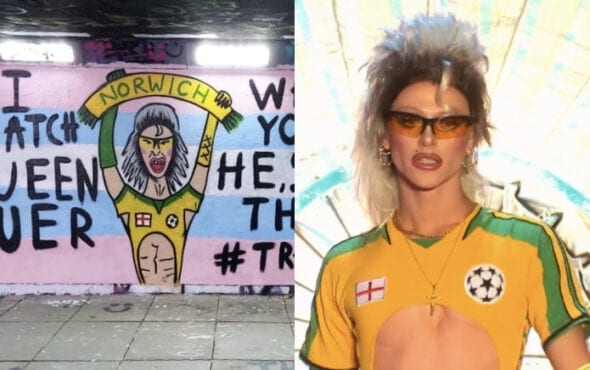 “I feel sorry for the people who felt threatened or intimidated by a message portraying love, positivity and kindness.”

According to a report from the BBC, a mural of Drag Race UK star Bimini Bon Boulash has been covered up in an act of vandalism.

The artwork, which was created in the Pottergate underpass in Norwich, was the product of local artist Knapple and transgender activist Sharpay Salazar.

In the mural, the two featured Bimini in her iconic Norwich City Football Club ensemble alongside an inspirational message supporting trans rights.

“Bimini babes watch the queen conquer. Whether you’re he, she or them!!! #transrights,” the mural read.

It was up for nearly four days before being covered up by graffiti.

Salazar expressed her disappointment in a series of tweets, stating: “To say I’m upset is an understatement. like to see so many trans lives in Norwich to be positively affected by something I did makes me so happy.”

She continued: “We deserve to be publicly seen, validated and celebrated. This silencing of my voice isn’t going to stop me 2021 here I come.” 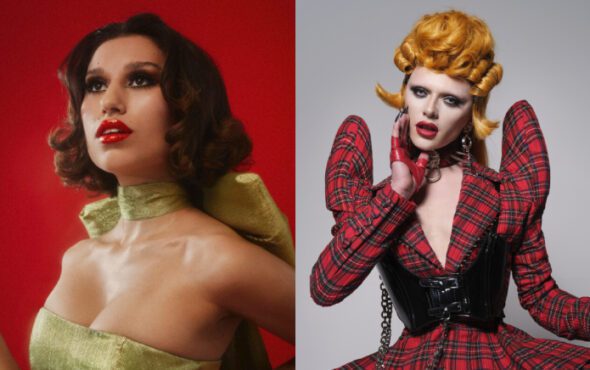 Bimini also took to Twitter to release a powerful statement.

“I will never stop being myself. I’ll never shy away from living an authentically queer experience even if there are people that disagree with our existence,” they wrote.

“Trans rights are human rights and I will push that message until the end. I don’t feel anger, I have sympathy. I feel sorry for the people who felt threatened or intimidated by a message portraying love, positivity and kindness.”

I don’t feel anger, I have sympathy. I feel sorry for the people who felt threatened or intimidated by a message portraying love, positivity and kindness.

Since their debut on Drag Race UK season two, Bimini has been praised by viewers for their LGBTQ+ advocacy and non-binary representation.

Over the last few weeks, they have wasted no time in creating their very own drag empire.

From being featured in numerous editorial campaigns like British Vogue to securing a PR team, Miss Bimini is effortlessly becoming a household name.