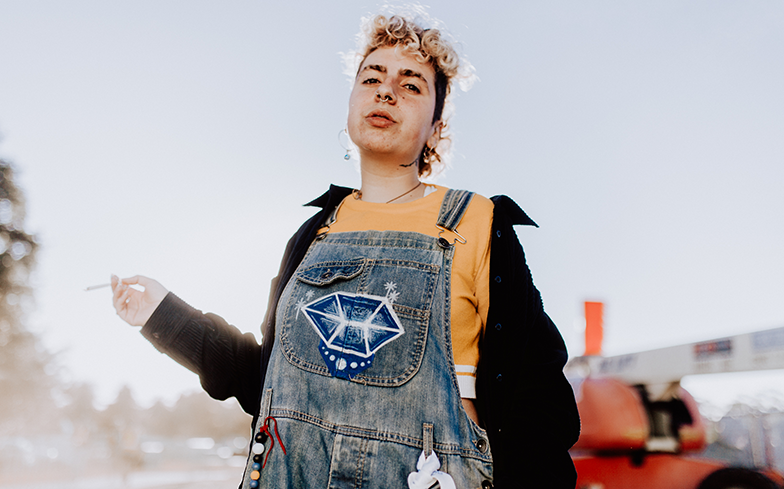 “When I have the energy to educate about gender and identity that otherwise may be avoided in day to day interaction, I am grateful and proud to have the opportunity to engage others in the complexities of gender identity.”

imbi the girl has just released their first EP (For Me), a stunning collection of alternative hip-hop and soul tracks, which the Australian artist describes as a product of their experience and a reflection of the “complexities of this existence”.

“However since coming out I have been privileged enough to be accepted and encouraged to live my truth by almost everyone in my close circle, and after experiencing that huge sigh of relief, I refuse to go back into the closet or pretend to be anything other than who I am, imbi.”

We caught up with the up-and-coming artist to discuss the meaning behind their stage name, the common misconceptions about non-binary people, and the struggles they face in the music industry as a non-binary musician.

How did you come up with imbi the girl for your stage name?
It’s quite a funny story because I actually came up with the name with my manager just about a month before I hit the crux of my gender crisis and realised I was non-binary. It was – and still is – a political move. I wanted and still want to bring attention to femmes in the industry and take up space unapologetically. I wasn’t feeling safe or comfortable enough to come out when the project was launched, so ‘imbi the girl’ was the go. I was a little distraught at first to say the least. I hold myself to a very high standard when it comes to honesty and authenticity and this name seemed – at the time – like a lie. How could I take up space in the industry as female, something I do not identify as? After we launched, I turned to my dearest and queerest to talk it through and they brought a bunch of valid, eye-opening points to me which changed the way I perceive the stage name. Firstly, they helped me see that I can and still do identify as a ‘girl’ and that doesn’t have to mean I identify as female.

My definition of ‘girl’ is much greater than a person’s chosen gender. There is a major flaw in the way society has defined ‘girls’. The word is used to belittle young femmes and to reinstate harmful gender ideals. A ‘girl’ to me is someone who achieves their dreams despite the world being against them, someone who defies the odds and comes out on top regardless of how naive, precious or weak people perceive them to be, or how much the world underestimates them. If I can help people reevaluate the way they see ‘girls’ then I am willing to face the constant misgendering. This is the strength of the ‘girl’ and that is something I try and emulate every day. Also, the constant misgendering leads to conversations, when I have the energy to educate about gender and identity that otherwise may be avoided in day to day interaction, I am grateful and proud to have the opportunity to engage others in the complexities of gender identity and to teach through my queerness.

When did you realise you wanted to be a musician?
I’ve always wanted to be a musician. Since I can remember, I was fantasising about being on stage and singing to large crowds. I always knew it was what I was supposed to do in this life, but my family was a bit more hesitant. That’s not to say they didn’t support me, they were just fearful of financial instability since it has been a recurring theme in their lives. My mum has worked so hard all my life to support and provide for my sibling and I, she only wants me to have a less stressful, more lucrative job so I do not have to face such stresses. Mind you, once I dropped out of uni, really put my head down with ITG (imbi the girl) stuff and started crossing off goal after goal, she realised the significance, importance and potential of what I’m doing and has been one of ITG’s biggest supporters ever since.

Who has influenced you as an artist?
There are so many wonderful musicians who’ve had profound impacts on my musical journey! However, Sampa The Great has to be one of my biggest influences, the power, energy and magic she incorporates into her music is something I will always strive to emulate, in my own way.

How would you describe your sound?
Ever-changing, always growing, fluid, and evolving. My music is a product of my experience and as I continue to live and grow more aware of the complexities of this existence, my music reflects that. I look at the songs I wrote when I was an angsty teen compared to the recently released EP For Me and wonder how the same person wrote such different music. I think the same thing when I compare For Me to tracks I have written since then.

You’re very honest within your songwriting (Acidic, V.I.P.), do you ever worry about sharing so much of yourself?
I used to worry, heck I still find myself worrying about it but the reality is I couldn’t make this work any other way. Someone once told me that what other people think of you is none of your business, you can do whatever you want to try and change it but they are the only people who can change their minds. The idea of putting on a mask used to be something that brought me feelings of safety and security as if I could influence what people thought of me. However since coming out and actively choosing to invest in and prioritise myself as well as choosing to learn all there is to know about imbi, the thought of pretending to be anything but is claustrophobic and honestly pretty repulsive. Of course, that’s not to say it isn’t a practical and valuable tool for folx who need it, it just isn’t something I can comfortably do anymore.

Is there anything you wouldn’t talk about in your music?
If there is, I haven’t experienced it yet.

Has it always been important for you to be publicly open about the way you identify?
To be honest, I’ve known I was queer from a very young age but attending a Jewish school and being a part of a fairly conservative community made it very difficult for me to overcome my engrained homophobia. I tried to convince myself I was straight, tried to convince myself I could be ‘wom*nly’ in the way the world wanted but it just didn’t work. However since coming out I have been privileged enough to be accepted and encouraged to live my truth by almost everyone in my close circle and after experiencing that huge sigh of relief, I refuse to go back into the closet or pretend to be anything other than who I am, imbi.

Growing up, was there anyone you could look up to, doing what you’re doing now?
As a youngen’ I always looked up to Missy Elliot and her ability to be who she was unapologetically and express herself truthfully through not only her music but her fashion and her whole demeanour. Now that I think about it, she was probably one of the first people who allowed me to see that I could embody more than the ‘wom*nhood’ I’d been indoctrinated into by society.

What is the most common misconception you’ve come across about non-binary people?
It makes me laugh when people say that ‘all’ non-binary people are anything. Being non-binary, for me, is a rejection of society’s gender constructs and a public declaration that my individuality cannot and will not be thwarted, but to most of the enby folx I know and love, it is something entirely different. To think that queer folx, who have analysed society and one way or another found they do not fit in and can not conform, who instead decide to pursue their individuality and live their personal truth – the thought that such unapologetically unique and self-aware people could be generalised in any way is a bit of a lol in my eyes. Every person has their own unique journey in their queerness and we can never ever assume that we understand someone else’s, let alone erase those stories by using generalisations. I’d like to add that I think this is applicable to all minorities.

What are the challenges you’ve faced so far as a non-binary musician?
This question is a big one. I have time and time again felt like a people pleaser, a tick in a box beside other minorities. I have found very few venues/festivals with gender neutral bathrooms. I have found myself very regularly misgendered on stage and by staff/crew and I rarely feel safe enough to correct people in industry environments. It’s this bizarre conflict of feeling like I should be strong, take up space and be loud for my queer kin, whilst also feeling like I’m being done some huge favour by just being given the opportunity to be there. That’s not the truth though, as a non-binary person of colour, my team and I work incredibly hard to reach goals and I wish I saw more industry professionals recognising and honouring that work just through basic respect. There are heaps of structures to put in place to accommodate your GNC artists, do a tiny bit of research and you’ll find a bunch, not all of which are as complicated as some people seem to think. I get it, it feels daunting and sometimes overwhelming but think about how we feel. Also, if you’re going to put me on your line up to sway your male to non-male ratio the least you could do is use my correct pronouns.

What’s next for imbi the girl?
I’m taking a break from gigs for the rest of this year but I have some really exciting things coming up after that. More than anything else though, I can’t wait to share the new music I’ve been working on. If you liked For Me you’re going to love what’s coming.

imbi the girl’s debut EP, For Me, is now available on iTunes and streaming services.