Iceman and Pyro hook up in new issue of X-Men: Gold comic 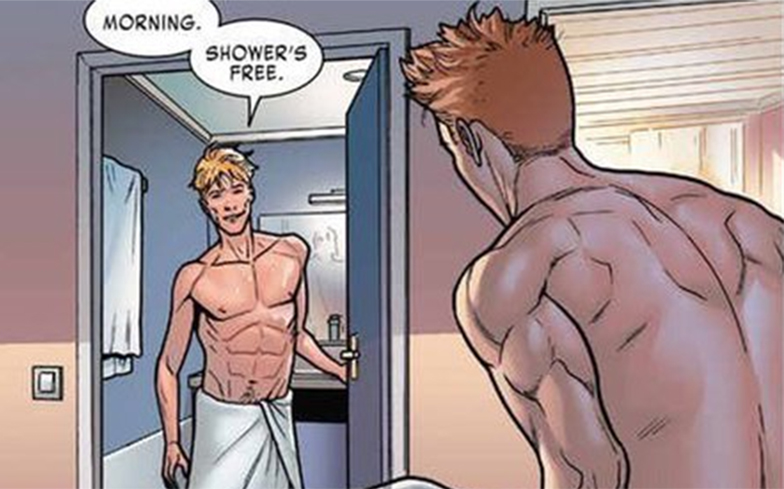 X-Men continues to provide LGBTQ representation in its comics.

The hit Marvel series has a long history of diverse and inclusive characters. Back in 2012, Northstar entered into a same-sex marriage with his partner Kyle, and last year Iceman had his first gay kiss with a glorious full-page illustration.

Now, in a preview for issue 32 of X-Men: Gold, which is due out on 18 July, Bobby Drake (Iceman) is seen discussing his hook-up with Simon Lasker (Pyro) in the wake of Colossus and Kitty’s wedding disaster [spoiler: it didn’t happen].

“Morning, shower’s free. Or I could go back in if you want company,” says Simon.

“I thought we agreed last night was a one time thing,” replies Bobby.

this Pyro/Iceman development in the new X-Men Gold would have given teenage me a heart attack pic.twitter.com/wZBDAmO3WJ

The same-sex scene has gone down incredibly well with LGBTQ fans on Twitter, with one person writing: “This Pyro/Iceman development in the new X-Men Gold would have given teenage me a heart attack.”

Some have praised the series for providing representation for same-sex relationships, while others simply appreciated the sight of Iceman and Pyro looking fine as hell.

Wow all of my childhood fantasies from the first X-Men film are coming true.

Mystique is also bisexual!!! No wonder Im bi Ive always had ~feelings~ for her as a kid woops. https://t.co/aNNZTXiLSg

We’re keeping our fingers crossed for more of this in the future… and we might just get it, as earlier this year, Marvel announced plans to revive Iceman’s previously-cancelled standalone comic series.