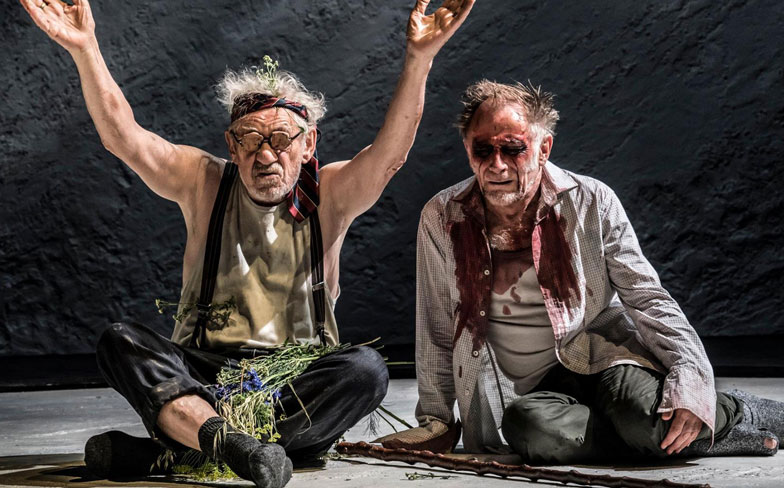 The multi-award-winning actor delivers an astonishing performance, supported by a talented ensemble cast, at the Duke of York’s Theatre.

Following a successful run at the Chichester Festival Theatre, Jonathan Munby’s modern production of King Lear has transferred to London’s West End. Given the length and tone of the play – this rendition weighs in at over three-and-a-half hours and is almost relentlessly bleak – Munby’s King Lear is surprisingly pacy and gripping. Through a combination of intelligent direction, cinematic production and some superb acting, this King Lear is an absolutely essential – and thrilling – piece of theatre.

Opening with an impressive sense of occasion – the heavily-decorated king is welcomed to his court, bedecked in union flags and featuring an oversized portrait – we watch as Lear amusingly uses a map and pair of scissors to divide his nation amongst his daughters, each share dependent on the amount of love they profess for him. It’s one of a number of engaging set-pieces, and the grandeur and ceremony contrasts wonderfully with later scenes where we see the fallen king shuffling across the stage in a grubby vest and trousers.

Related: Kelli O’Hara perfection in dazzling production of The King and I – review

There are too many excellent moments to list them all, but one particularly gripping scene involves the blinding of Glouceseter, which is truly shocking. It is one of the more cinematic moments of the play, and reminiscent of the torture scene from Reservoir Dogs – as the unfortunate victim is tied to a chair, Regan switches the radio on and dances with maniacal delight as her husband removes Gloucester’s eyes with a meat hook. It’s engaging and nauseating in equal measure.

This production boasts a large and talented cast, each actor delivering an impressive performance. Of particular note, we enjoyed the nuanced and varied performances of Goneril (Claire Price) and Regan (Kirsty Bushell) and the interplay between the two sisters. James Corrigan, meanwhile, entertains as Edmund – although occasionally close to overstepping into pantomime territory, he plays the villain extremely well and injects a surprising amount of humour into his lines.

Star of the show, of course, is Ian McKellen in the titular role and his is an absolutely devastating performance. In the opening scene, we witness a towering, angry, despotic figure, deploying language as a weapon to devastating effect; over the course of the play we are witness to his gradual descent. The implied dementia is explored sensitively, with McKellen subtly exploring its gradations and non-linear effects as it takes hold. It’s genuinely one of the most moving performances we’ve ever seen.

If, as has been hinted, this King Lear is McKellen’s last Shakespearean outing on the West End Stage, then it’s a fitting swansong – absolutely outstanding.