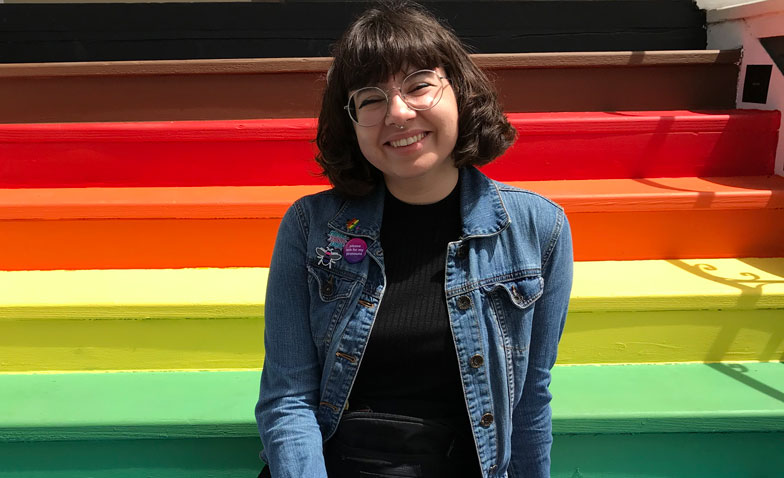 Why use the word officially, you might ask? Because even though the process started when I was 18, no one used the word intersex to describe my body’s natural hormonal variations or the differing function of my internal reproductive structure even though these things make me officially intersex.

With all the misconceptions and misrepresentations there are about the intersex experience, I assumed that intersex people were sat down by their doctor and told: “You are intersex.” Or, more likely, “I’m so sorry, but unfortunately you are intersex.”

Intersex people are viewed as a biological fluke, a mistake. Certainly not an identity to be celebrated – which is why most intersex people are never told that we’re intersex. Admitting that we’re intersex would mean identifying that there is a broader community of people with a shared or similar experience that would create a sense of pride, the creation of our own culture, and our mobilisation against the injustices that intersex people face. So, the word intersex is left out of most of our stories – for months, years, even decades at a time. Given this stigma, most people will never understand the absolute relief that followed the discovery that I’m intersex.

The process started for me several years after I’d already come out as transgender. Rather than being concerned when I didn’t get my period, I was elated. It was as if my prayers had been answered. My stomach and legs being hairier than my brother was a personal achievement. My higher-than-average sex drive was the social expectation for a boy my age. I liked that I didn’t need to strain my voice for it to take on a naturally deeper tone. And I even remember making a secret trip to Target so that I could buy men’s razors to shave the thick hair growing on my face.

My body felt like a home to the identity that I was cultivating as a boy going through puberty. But I eventually came to understand that this puberty – during which I developed the ‘wrong’ secondary sex characteristics as a result of my body producing the ‘wrong’ primary sex hormones – was an intersex puberty that I simply didn’t have the knowledge or vocabulary to describe. The dysphoria and disconnect that I felt with my assigned sex at birth and the feeling that my body was more aligned with the other binary sex was a result of being intersex, not transgender.

I wouldn’t have even known if it weren’t for a conversation I accidentally started with my doctor. Normally “When was your last period?” was a question I shrugged off, but one day I answered it honestly instead. “I’ve never had my period.” Finding out that you’re intersex doesn’t happen in
just one conversation, though. It’s not like finding out you have the flu where there are a few, quick and easily identifiable symptoms. No, finding out that you’re intersex happens over the course of hundreds of conversations with doctors, parents, partners, and online forums full of messages asking the same question that had crossed my mind once or twice. “I’m already 18, 19, 20, and I’ve never had my period. Am I okay?! Help!” But after enough bloodwork to feel like a pin cushion and enough Googling to finally find the word intersex, I started to understand why
I always felt so different. Why I never felt like a ‘normal girl’. Why I felt dysphoria with my assigned sex and with the gender I identified as. Why I didn’t feel like I had the ‘typical’ trans experience. I breathed a sigh of relief when I finally put two-and-two together. I am intersex. The thought made me feel like I was going to be alright after all.

A few studies have looked at the intersection between intersex and LGBTQ identities. One study from 2016 found that 52% of intersex people identify as ‘non-heterosexual’. Another study found that up to 40% of intersex people experience dysphoria and transition, compared to only 10% of the general population. And, when looking at the statistics of intersex youth specifically, 75% identify as LGBTQ. Needless to say, intersex people are very integrated into the LGBTQ community – whether the ‘I’ is included in the acronym or not. As someone who identifies as non-binary and bisexual, I initially expected a positive experience within my community. But the LGBTQ community has not always been the most welcome place for intersex people.

For instance, I was used to cisgender people asking me about my genitals or which bathroom I used, but I wasn’t prepared for this to come from trans people too. Most people, whether they’re cis or trans, harbor the incorrect assumption that all intersex people have ‘ambiguous’ genitals.

Within the LGBTQ community, this ambiguity is viewed with jealousy and desire, to the point where trans people tell me that they wish they were intersex. But they don’t wish they were actually intersex, because that means medical trauma, social discrimination, and ignorance like this. They either want points for existing outside of the sex binary, or ‘ambiguous’ genitals to validate their non-binary gender or androgynous presentation.

Perhaps worst of all, intersex people are routinely left out of conversations that affect us too, such as discussions on bathroom bills, reproductive rights, non-binary gender markers, coercive gendering of infants, Title IX protections, and more.

Recognise that all intersex people are different. Intersex people are just as diverse in our gender, expressions, presentations, and sexualities as non-intersex people. We can be cis or trans, straight or queer, masculine or feminine or both or neither – don’t assume you know our identities based on the fact that we’re intersex alone.

Don’t use intersex people as ‘gotchas’. A common retort from people during transphobic arguments is ‘but if there are only two genders, then how do intersex people exist?’ Try to avoid this. Intersex people don’t exist solely to further your arguments, we are a diverse community with unique needs that deserve our own spotlight.

Don’t include us as an afterthought. At the end of the day, the debate about including the ‘I’ in the acronym is fought on both sides. But including one letter as a last-ditch effort to be inclusive doesn’t quite cut it. Unless you intend to make the community a safe, inclusive and affirming place for intersex people, then don’t simply add the ‘I’ for ally points. Do your part to stand up for intersex people and educate others on being the best intersex allies they can be before claiming inclusivity.

Finally, listen to intersex people. Doing this is the quickest way to signal that your community welcomes ours and is the easiest way to create a space for us both.

More information on Mari Wrobi can be found here.