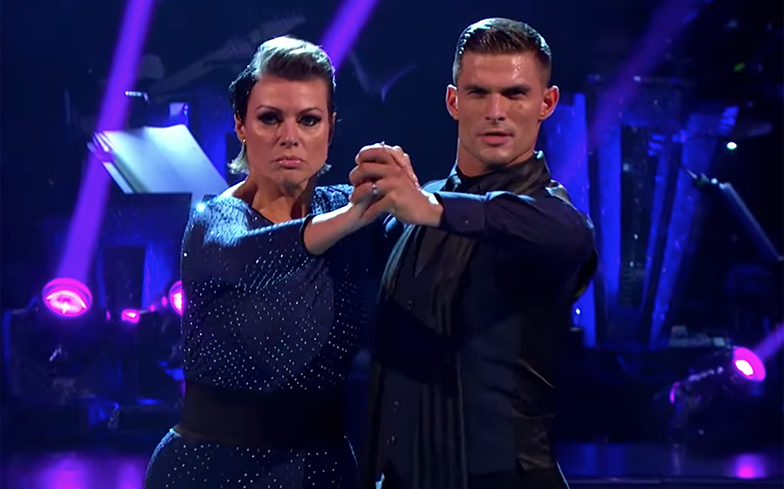 “You could’ve gotten better movement out of a lamppost.”

Last week saw the triumphant return of Strictly Come Dancing’s live shows. There were some great dances from Ashley Roberts and Faye Tozer, some great surprises from Joe Sugg and Dr. Ranj Singh and a downright disaster from Susannah Constantine.

This time around there were some great dances from Ashley Roberts, Faye Tozer and Joe Sugg, some great surprises from Kate Silverton and Vick Hope and a downright disaster from Susannash Constantine…

It proved to be Joe’s amazing jive that captured the public, as 35% of you who voted in last week’s poll voted him as your favourite performance of the night. Ashley and Faye got joint second as they both 13% of the vote, and perhaps most surprisingly Graeme Swann’s cricket-themed samba managed to pick up 8% of the vote.

However, with all different dances this week that could all change.

Yesterday’s show got off to a decent start with Stacey Dooley and Charles Venn performing some decent dances, even if there wasn’t anything amazing about them. But then we hit a little low, and the only poor part of the show.

We were expecting a bit more character and power from Katie Piper in the paso doble, especially from the training clips, but she failed to deliver. Graeme Swann also fumbled his American smooth rendering it nearly impossible to watch.

But with a snap of fingers, Kate Silverton delivered the first must-see performance of the night. All week she as saying how much she loved the tango, and from the work that she put into it, you could definitely tell. It looked smooth, full of attack and full of the passion that she wanted to display in the routine.

It takes two to tango.. But it takes @katesilverton1 smashing every step to make me proud!! @bbcstrictly pic.twitter.com/k2i08h5Cao

Joe Sugg then absolutely smashed his charleston with his amazing energy, in an incredibly choreographed routine by Dianne Buswell. To be able to take on two of the most high-energy dances in the first two weeks and make them both look incredible, Joe definitely has the potential to go all the way.

Susannah on the other hand does not… It’s hard to say whether it was better than her samba last week, but to me it looked like she was still walking through the steps, and it’s no surprise that she ended up getting scored the lowest for a foxtrot in Strictly history. But following Susannah’s dance disaster, Lee Ryan was able to pull off a very fun jive.

Danny John-Jules then delivered a satisfactory cha-cha-cha, but given his disco experience, I was expecting something a bit more sensational. But then Vick Hope came on. Her jive last week was pretty poor, and like most I presumed she’d be more a Latin girl. But that’s the issue with assumptions, they’re nearly always wrong, and Vick proved it with a beautiful waltz. It looked like something went a little wrong in the middle, but following last week that was an impressive performance that might have saved her.

As we entered into the closing stages of the show, Dr. Ranj failed to deliver on high hopes with an adequate salsa, and Faye Tozer was able to perform an amazing contemporary Viennese waltz. Lauren Steadman couldn’t follow up that performance as her charleston was less than stellar, but she still did a thoroughly decent job.

And with comparisons to series 2 winner Jill Halfpenny, Seann Walsh then took to the floor. He seemed to have all of the right moves, but being out of time for the whole routine scuppered any chance he had of mirroring Halfpenny. At least Hairgate was finally addressed, as Shirley complimented the comedian on his locks.

The final dance of the evening was former Pussycat Dolls singer Ashley Roberts. Say what you like about previous experience, but that girl can definitely move, and for the second week in a row the show was finished off by an absolutely amazing cha-cha-cha. She deserved the first 9 of the series.

And adding a bit of flair to tonight’s proceedings Craig and Shirley ended up arguing over Faye’s Viennese waltz, Tess Daly completely lost it following a joke about Dr. Ranj, and comedian Romesh Ranganathan told fellow comic Seann Walsh that he was going to “tank” his performance. Well, Romesh, you weren’t wildly off the mark there…

My votes went to Ashley and Kate and you can exactly why below.

But now, we move into the first elimination of the series. As Chizzy from last series proved, you don’t have to be anywhere near the bottom of the leaderboard to be in danger. As much as the nation loves a comedy act, Susannah does have to be in consideration. Katie and Seann also scored quite low and both nights, and didn’t get any votes in our poll last week so they could be in danger.

Graeme’s poor performance from tonight could also see him in danger. And as the mid-section is never safe, Stacey and Vick could also find themselves dancing for their survival, but following tonight’s performance it’s pretty hard to see Vick going home.

But what did you think of last night’s dances? Let us know by voting for your favourite performance of the night by voting in our poll below.