How was Eurovision 2018? Here’s everything that happened on the night 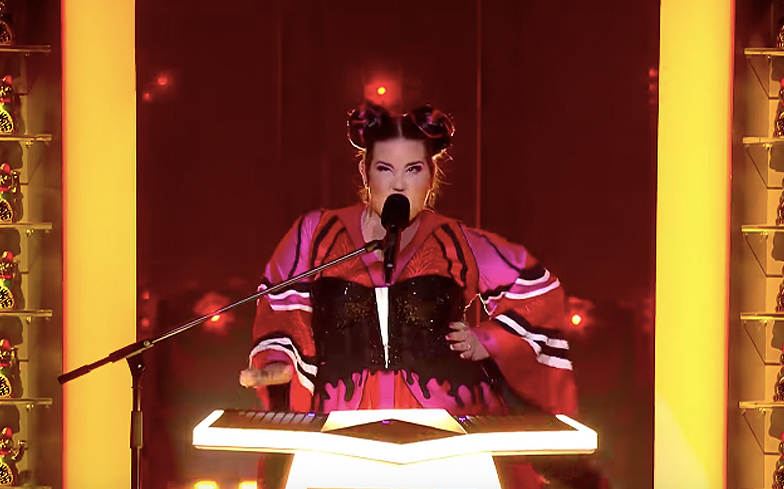 Warning: this article will contain spoilers from the Grand Final of Eurovision 2018. If you haven’t watched it, then what were you doing last night? Also, go and watch it, and then come back here.

Eurovision 2018 was a spectacle that was on par with most other Eurovision finals. It featured everything from cringy hosts, a stage invasion and just general madcap entries – yes, we’re looking at you Moldova.

The competition took on an All Aboard theme for this year, so it featured sailors presenting our singers at the start, and in the little cues, the singer were whisked away to show off the various locales of Portugal. And it’s safe to say that Portugal is a really beautiful country, and with how far advanced LGBTQ rights are in the country it’d certainly be a worthy holiday destination.

And if all of these nautical and travel references weren’t enough, before each little cutaway, the performer’s flag was shown on screen, created by animated sea fronds. Those were visually spectacular.

But then it was time for the meat of the event, 26 countries performing whatever song they could come up with. The event started off with Ukraine’s Mélovin, and while his performance was fairly decent, and the piano coffin was eye-catchingly great, the song was less than spectacular, and it soon got lost in all of the other entries.

As the competition progressed we were treated to poor performances from the likes of Spain and Slovenia. Although one of our highlights of this year’s Eurovision was when Slovenia’s singer, Lea Sirk asked for the audience to sing along with her, and the camera cut to a rather bemused fan who mouthed “What?” at someone.

These were followed by Lithuania’s Ieva Zasimauskaitė, and her song really resonated with the British public, considering she got the most votes from us. This was followed by great performances from Austria’s Cesár Sampson, whose song,  Nobody but You resonated with the judges, but the public less so; and then Estonia’s Elina Nechayeva who performed a beautiful opera piece and in what was the most impressive outfit of the night.

Norway’s Alexander Rybak – who had previously won the competition back in 2009 – gave a visually impressive performance, but with a song that wasn’t brilliant. Portugal put in a solid performance, but then we got to our entry, SuRie.

Oh, poor SuRie. She put in an amazing performance, but halfway through her track a stage invader – and no it wasn’t Deadpool protesting Canada’s absence –  grabbed the microphone and shouted “For the Nazis of the UK media we want freedom.”

He was quickly gotten off stage, and SuRie was able to continue her performance, but it did put a small dent on proceedings. Following this there was a cut to an admittedly obviously unscheduled interview, and it was later confirmed that although SuRie was given the opportunity to perform again, she turned it down. And sadly, despite a strong performance in the semi-finals, the judges snubbed her, and she received few votes from the public, leaving us in 24th position.

No one should ever gate crash a performance… Not freaking cool… 😒 #PoorSuri She was doing an awesome job. I hope she gets to go again. ❤️💜💚🧡💙💛 love to @surieofficial 👍🏻🌍 #ESC18 #Eurovison #UK

When the competition restarted, it was a forgettable performance from Serbia, but following them was Germany’s Michael Schulte. And he gave one of the best performances of the night with his song, You Let Me Walk Alone. Powerful lyrics, and great graphics made this one of our favourites on the night.

Albania’s Eugent Bushpepa followed with a fairly solid performance, but this was blown out of the water by France’s Madame Monsieur, who which was another performance that blew us away.

Sadly the same can’t be said for the Czech Republic’s Mikolas Josef. The performance was visually appealing, in more than one way, and the choreography was amazing, but the song itself was fairly forgettable.

We then got some amazing performances from Denmark, which was another one of our favourites on the night, Australia and Finland, but then sadly we hit a little bit of a rut.

Bulgaria was forgettable, Moldova’s was hilarious but too bizarre to take seriously, Sweden suffered from the exact same problems that the Czech Republic did, and Hungary was heavy-metal, which doesn’t generally go down well.

But then we got an amazing performance from Israel’s Netta, and her song Toy, or as some of you may know it as the Chicken Song. This is down to the amount of chicken noises that Netta makes while performing it, but the song of female empowerment was just captivating. So much so that we barely remembered the following entry, which was the Netherlands.

Ireland’s Ryan O’Shaughnessy then delivered a beautiful performance of Together, and then Cyprus delivered us with the instant classic, Fuego, performed by Eleni Foureira. Italy topped off the night, with a beautiful song about terrorism, and then it was down to the voting. Austria, Israel and Sweden emerged as the favourites following the jury vote. And the jury vote delivered one of the other best moments of the night, where Graham Norton told the stadium not to boo when Russia announcer came on, before swiftly encouraging them to do so following their giving of Moldova 12 points.

But after the public vote, the results shifted. Sweden and Austria fell by the wayside, the Czech Republic was propelled up to sixth place, and in the end it was Israel’s Netta who triumphed.

In her acceptance speak Netta praised diversity, saying: “Thank you so much for embracing difference and diversity – next time Jerusalem.”

You can watch Netta’s winning performance below, and check out some of our favourite tweets of the night.

europeans 99% of the year vs europeans during eurovision pic.twitter.com/FqiIswD5iv

Europe for the next 4 minutes. #ESC2018 pic.twitter.com/nSA6GomrSV

Who you gonna call? #Eurovision pic.twitter.com/UkOKAAo4nM

Baby you light up my world like nobody else
The way that you flip your hair gets me overwhelmed
But when you smile at the ground it ain't hard to tell
You don't know, oh oh
You don't know you're beautiful #Eurovision pic.twitter.com/XlPHWsvXEu

give me anything and everything that's too gay for China #Eurovision

eurovision is now over what do i do with my life pic.twitter.com/824ZeYy1Cw