How to Catch a Krampus is a dark, bizarre Christmas alternative – review 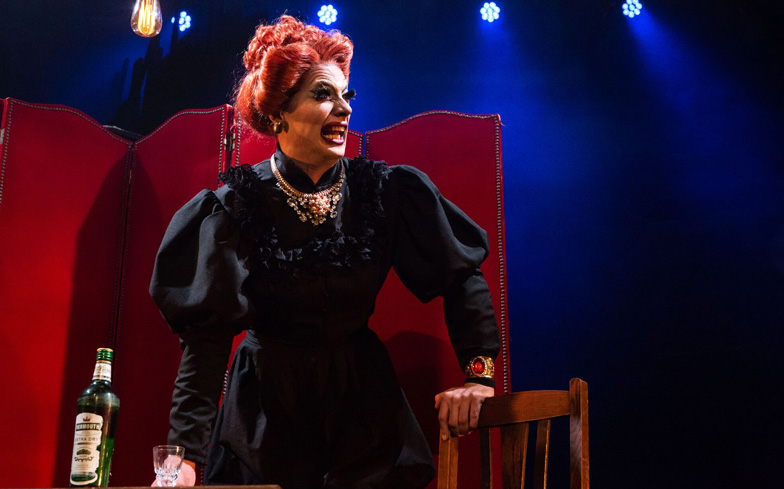 Written and directed by Ginger Johnson – who takes centre stage for much of the show – How to Catch a Krampus is Sink the Pink’s most ambitious work to date. This theatre residency culminates a year’s worth of 10th anniversary celebrations for the collective.

The show is based loosely on the Central European folklore myth of the Krampus. In contrast to the Christmas story with which most of us will be familiar – where good children are rewarded with presents – the Krampus represents a dystopian alternative where naughty children are punished. In this instance, the demonic creature – described as half-man, half-goat – has kidnapped a naughty boy and his mother is on a quest to rescue him.

We say it’s loosely based on this because it’s not really a play; we were expecting more of a narrative with some songs dropped in, but it’s quite the opposite. This is much more of a music hall style variety show, with little snippets of plot here and there. Given that it’s not really obvious how the performance elements fit in with the rest of the story – there are no overt links between the song and dance numbers and the narrative – it all just seems a bit confused. How to Catch a Krampus doesn’t really know what it wants to be.

That’s not to say it isn’t enjoyable – there are plenty of entertaining moments. The operatic section is amusingly staged and there’s quite an unexpected interpretation of Rihanna’s S&M. It very much saves the best for last, too, with a gloriously shambolic rendition of the Twelve Days of Christmas drawing proceedings to a close.

Much of it was less successful, however. Some of the jokes were very funny indeed, but others were a bit tired and predictable; some of the material didn’t land at all. Unfortunately, a number of the sketches overstayed their welcome, too. The carol singers reinterpreting Christmas hit singles – including an excellent rendition of Bob the Builder, set to the melody of God Rest Ye Merry Gentlemen – started off well but rapidly lost momentum. The Morris dancers, too, were funny to begin with but the joke was stretched too thinly.

Sadly, How to Catch a Krampus is a mixed bag of a variety show which never adds up to more than the sum of its parts. That’s not to say it isn’t enjoyable – it certainly has its moments – and for those who are looking for something a bit different this festive season, it’s certainly a dark, bizarre alternative to the usual Christmas fare. We were just hoping for more – it’s a show which feels like it has a lot of potential and has ended up being a bit of a missed opportunity.