How did the Strictly celebs cope with two dances in last night’s semi-final? 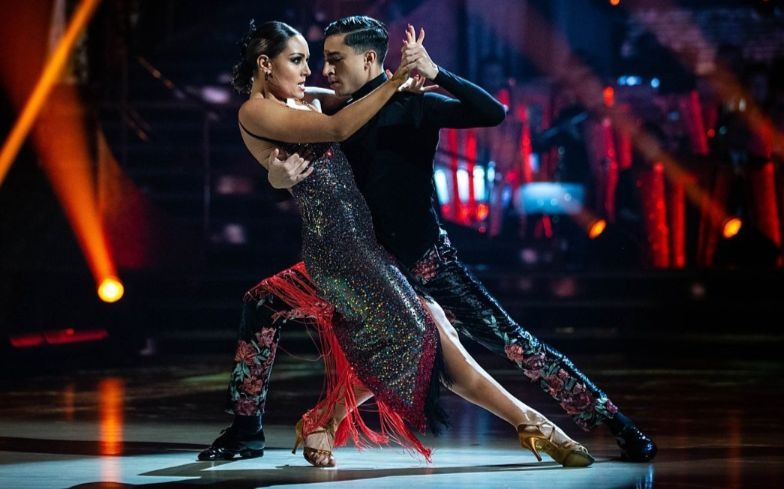 The celebrities danced their best in Strictly 2019’s semi-final.

The semi-final of Strictly Come Dancing is probably the hardest challenge the celebrities face. Yes, they have more dances in the final, and the pressure is on, but at least in the final, two of their dances they’ve already done. This time around, they’re getting to grips with two new dance styles, in the same amount of time they’ve had to get to grips with just the one.

Last week, the curtain fell for footballer Alex Scott. In the early parts of the competition, it looked like she could be a surprise elimination, but after her Charleston she did really up her game, even if she didn’t hit the highs of the remaining celebrities.

And in last week’s poll, it was a clean sweep for CBBC star Karim Zeroual, who’s sensational jive not only wowed the judges, but audiences back home as he got 100% of the votes in our poll. And if you want to vote for you performed your favourite dance this week, you can vote by following this link here.

The show opened with EastEnders actress Emma Barton doing the cha-cha-cha. A lot of cha-cha-chas from Anton du Beke in the past have been very lacking, partner ability aside, but this was one of his best, and Emma actually managed to look in her element in this dance, making it a surprise hit.

It wasn’t a surprise that Kelvin would nail his quickstep though. The former Emmerdale hunk has been waiting for that 40 score ever since his samba wowed the nation back in the first week, and he finally got it. He probably should’ve gotten it for his jive back in Blackpool, but when his moves this time were flawless, it was definitely well-deserved.

Comedian Chris Ramsey was a little less certain on his feet, as he did manage to stumble through the Viennese waltz. His journey on Strictly has been a sweet one to watch, but at this point in the competition, it’s clear that’s he met his limit and should be eliminated.

CBBC cutie Karim Zeroual closed out the first dances with a very sensual Argentine tango. There was a lot of pressure on his shoulders following his 40 performance the week before, and tackling the fan-favourite dance, but he mostly triumphed with a memorable routine.

Then it was time for the second dances, which is usually the stronger routine for the celebrities. And this was certainly true for Emma as she delivered the most beautiful waltz that was danced this series. It might not have scored as high as Saffron’s, but this dance was truly something to behold.

It was quite the gear change to move from that serene waltz to Kelvin’s powerful paso doble, but once again Kelvin delivered. But despite nailing that perfect score earlier, he wasn’t as strong this time around, and his score did deservedly drop a little.

Surprisingly, Chris’s score increased from his Viennese waltz, even though his rumba was probably the best place to take a bathroom break if you needed one. He’s done well for himself, but the rumba highlighted his struggles, and it wasn’t pretty to watch. I have no idea where three 8s managed to surface from.

But Karim was able to close the show out in style. It might not have been his best ballroom routine, his tango and quickstep from previous weeks are still stuck in my mind, but he closed the show out perfectly and got a smile on everyone’s faces.

Overall, it was Kelvin who topped the leaderboard, with Chris seriously lagging behind on points. Given he was in the dance-off last week, it’s difficult to not see Chris there, but at this point in the competition it can be anyone’s game. Given his high scores, Kelvin would probably beat anyone he’s up against in the dance-off, so he’s the only guarantee to be dancing in next week’s final.

With some amazing routines from Kelvin and Karim, you can watch their quickstep and American smooth below, or by following the links here and here respectively.