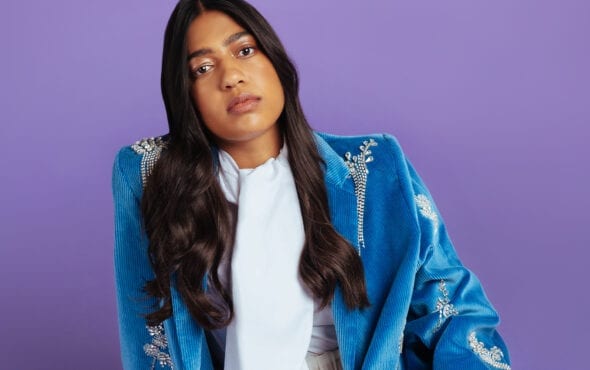 Following the announcement on the single, Hope shared insight into the meaning behind the single.

“I wrote Mad about having feelings of frustration and hysteria in a long-distance relationship. It’s about being unable to communicate properly, and feeling lost in loneliness – so it’s ironic that I wrote most of the song a week or two before the first lockdown started in the UK. Foreshadowing, almost,” she said in a statement.

Speaking exclusively to GAY TIMES, the singer-songwriter opened up about the debut track.

You mentioned Mad encapsulates a moment of frustration. Can you elaborate on that?
Mad is about feeling isolated and frustrated within a relationship; feeling a lack of control and just wanting to let it all out. It’s as close as I’ll ever get to screamo,” she told us.

What do you hope fans can take from his new song?
Whatever they want! Hopefully, they enjoy it. It’s the type of song you can dance to, or be angry to, or vibe to – whatever works.

Can you share your favourite lyric and tell GAY TIMES why it resonates with you?
There are a lot of lyrics I’m really proud of in this song, but I love ‘Who’s to blame? Well Cupid is, before his arrow disappears’ in verse 1; I’ve always been drawn to the symbol of Cupid and I like the idea of there being an invisible extra presence in the romantic narrative who means well but is also mischievous.

You can listen to the video for Mad here or below: