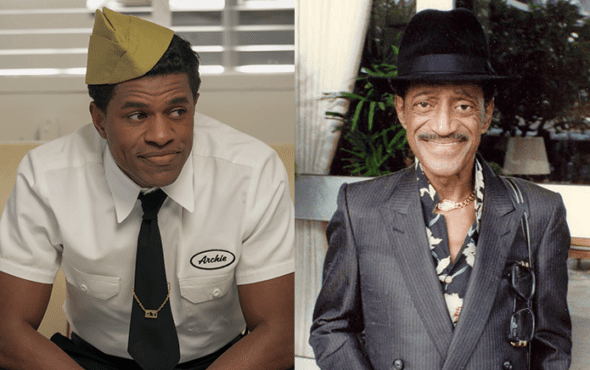 Jeremy Pope has just been cast as one of the most beloved entertainers in history.

The star, who recently earned international recognition for his role in Netflix miniseries Hollywood, is teaming up with writer and director Janet Mock for a biopic on Sammy Davis Jr. called Scandalous!

According to Deadline, the film will chronicle the controversial Romeo and Juliet-esque love story between Davis and Vertigo star Kim Novak in 1957, which resulted in widespread racist backlash from the entertainment industry.

In BBC documentary Sammy Davis Jr – The Kid in the Middle, it was revealed that Harry Cohn, co-founder and president of Colombia, hired mobsters to threaten Davis with blinding his other eye or breaking his legs if he didn’t marry a Black woman within 48 hours.

Mock will direct and work on the script from Matthew Fantaci, while Jonathan Glickman – who is currently producing the Aretha Franklin biopic – will produce. Although Glickman has a deal with MGM and Mock with one at Netflix, they are reportedly shopping it wide.

Pope received critical acclaim for his performance on Hollywood, earning an Emmy Award nomination for Outstanding Lead Actor in a Miniseries or Movie.

He also made history in 2019 when he earned two Tony nominations for Choir Boy and Ain’t Too Proud, becoming the first Black performer to do so. For the latter, Pope also earned him a Grammy Award for Best Musical Theater Album nomination.

Earlier this year, it was announced that the star will collaborate with Hollywood creator Ryan Murphy once again for the third season of Pose.

In an interview with The Hollywood Reporter, Murphy revealed that he’s cast Pope as a straight character. “I’m really interested in him doing that one, two punch of Hollywood as a gay person and Pose as a straight one,” he said.

Related: Ryan Murphy says the third and final season of The Politician is “years” away.