The Scottish actor arrived onto the beloved British soap earlier this year as a police officer investigating the County Lines drug scandal.

His character has since become romantically involved with James Sutton’s long-running gay favourite, John Paul McQueen, which has earned Kerr a devoted following within the LGBTQ+ community.

In the months since P.C. Kiss debuted, however, fans have noticed a more menacing side to the character. Earlier this month, P.C. Kiss threatened John Paul’s ex-boyfriend, James Nightingale (Gregory Finnegan), and intimidated him with his police authority.

He later manipulated John Paul into believing that James was lying about their encounter, and also caused a stir with audiences when he hurled some pretty brutal words towards his heartbroken ex-lover, Dean (Gregory Finnegan).

One fan made her feelings clear about Kerr’s performance on Twitter, telling the star: “You made me so angry tonight! Definitely the sign of an excellent actor!” She continued to say: “I have some theories about your character.” Alongside a wink-face emoji, Kerr wrote in response: “Little messages like this make my day. Thanks Nat, makes me happy to make you angry (in a good way).”

In an interview with Inside Soap earlier this year, the actor said he’s unsure of P.C. Kiss’ sexuality.

“I don’t know if my character will be straight, gay, or a bit of both, but I’ve heard there could be a nice relationship,” he said at the time, before joking: “The more trouble there is in Hollyoaks, the more I’ll be involved in the storylines! I’m looking forward to George having as much drama as possible!”

Check out some of the best reactions to P.C. George Kiss below.

Little messages like this make my day. Thanks Nat, makes me happy to make you angry (in a good way) 😉 https://t.co/bOvsYVoX7S

PC Kiss is just an annoyance now. Next! #Hollyoaks pic.twitter.com/nyYhs9vgy3

The dark PC Kiss. What's he hiding? I think he's the one behind the doll. Still .. got to love a man in uniform 😉 @Callum_Kerr_1 @Hollyoaks 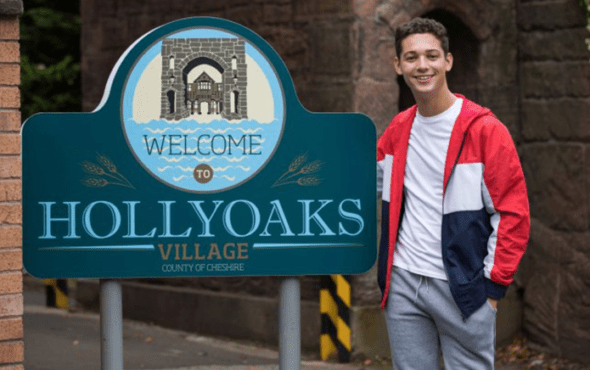 PC Kiss Is Annoying. Where Did He Come From & Why Is He Here 🙄 #Hollyoaks

I am not the biggest fan of PC Kiss type of villains. 😬 #Hollyoaks

I love their feud #Hollyoaks

@Hollyoaks This war between PC kiss an James is amazing

I KNEW PC Kiss was a wrong-un.
The McQueen's really know how to find the worst men in the village, don't they. I know there's not a big selection, but bloody hell! pic.twitter.com/2S2oF0MjPe

That PC kiss is a bit fit. pic.twitter.com/H4ykSb33ly

@Callum_Kerr_1 you are my favourite person ever in hollyoaks