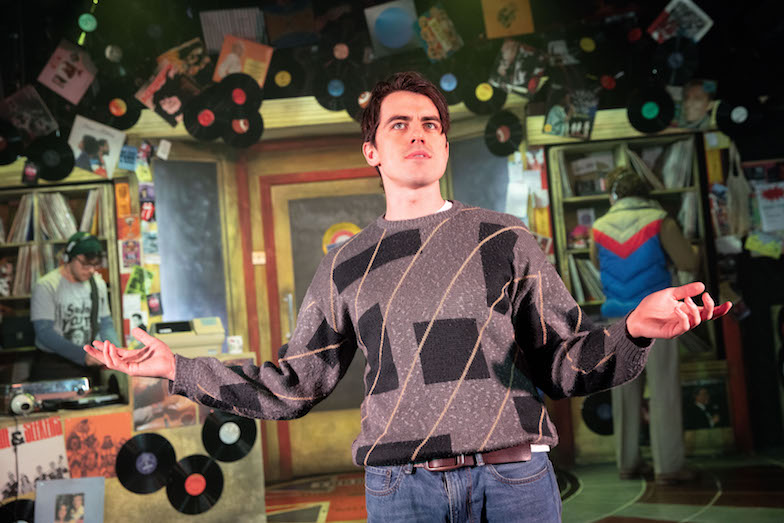 The musical, based on Nick Hornby’s 1995 bestselling novel of the same name, has opened at London’s new Turbine Theatre, directed by Tom Jackson Greaves.

The Turbine Theatre opened earlier this year, housed in a railway arch next to the redeveloped Battersea Power Station. Following a revival of Harvey Fierstein’s gay classic Torch Song, High Fidelity becomes their second production and first musical. It’s had quite a journey to get where it is today. Hornby’s novel took place in a record shop on Holloway Road; the subsequent film adaption moved the setting to Chicago; the original version of this musical, which opened on Broadway in 2006, kept the American setting; while this production has had the lyrics and book adapted by comedian Vikki Stone, returning events to their original London location.

It tells the story of Rob (Oliver Ormson) and his on-off girlfriend Laura (Shanay Holmes). He is the owner of Championship Vinyl, endlessly making mixtapes and top 5 lists while the record shop makes precisely no money; she’s a lawyer who can actually pay their rent. There’s not much more to it than that – the plot really is wafer thin and somewhat pedestrian – and while it may be a bit predictable and full of cliches, this fun musical still provides a couple of hours of lighthearted entertainment.

The songs themselves are pleasant enough, even if few of them really stayed with us. The highlight is an excellent number at the opening of act two, where Rob sings about the bragging rights of sleeping with a rock star once removed, which culminates in an amusing choreographed moment involving an elaborate series of masks linking his sexual exploits back to Kevin Bacon. It’s a musical which really wears its influences on its sleeve, too – the Neil Young and Bruce Springsteen pastiches really sound stylistically like their source material, even if the songs are pale imitations of the real thing.

There may be some weaknesses in the songs and book but thankfully this staging of High Fidelity is carried by an energetic and talented cast. Oliver Ormson as Rob has a demanding role – he’s on stage almost the entire time – but he makes it look effortless, hitting the high notes and nailing each routine with ease. He’s a captivating performer with a great singing voice, although his accent leaves a lot to be desired. Bobbie Little also impresses as friend Liz – it’s great to see a strong female voice cutting through in a story largely dominated by lad culture.

There’s enough to appreciate in High Fidelity to make it an enjoyable night out at the theatre. In terms of production values it really shines; the set looks authentic and the choreography impresses, even if it looks a bit cramped on the tiny stage; the band sounds great, and the cast help carry the more middling songs and paper over some of the weaknesses in the plot. It may not have impressed us as much as the Turbine Theatre’s debut offering but it’s still a nice enough way to spend an evening.