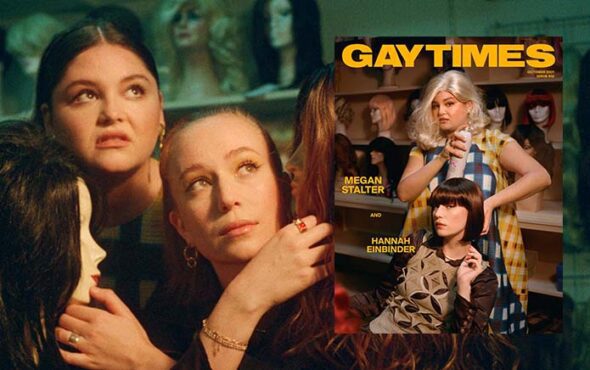 Hi Gay (Times) readers, you ready for a Hacks special?

Because this month, we have the stars of the 2021 breakout HBO Max series on our cover: Hannah Einbinder and Megan Stalter.

The former plays series lead Ava, a witty Gen-Z writer and comedian with a ‘cancel culture’ past who teams up with a legendary Las Vegas comedy diva (played by Jean Smart) to revive her career.

For her performance, Einbinder received a Primetime Emmy Award nomination for Outstanding Supporting Actress in a Comedy.

“I’m not gonna lie, I cried. I feel so connected to Lucia, Paul and Jen that I want to make them happy and do right by them and honour them,” she says of the nod. “Everyone’s individual and collective nominations are good for the whole show and I was just so glad to be a part of that. It’s just so… surreal.”

Like Ava, Einbinder identifies as bisexual. Speaking with Stalter – who plays the nepotistic yet endearingly incompetent assistant to Ava’s manager who steals every goddamn scene she’s in – the star praises Hacks for the nuanced depiction of her queerness.

“I thought it was so graceful and seamless. To get a queer character is one thing, but to have them honoured is totally different,” says Einbinder. “It’s a whole different bag, and I couldn’t believe it existed because I had never seen it before. I’d seen it in various films, not on TV and not as a lead character.”

Stalter, also a bi-con, responds: “And not a lot in films either. We’re so starved of it.”

Elsewhere, Stalter discusses the viral fame she attained after posting her iconic “Hi gay!” Pride Month video, and the surprising story behind it. “A lot of times when something goes viral, it is something you just did. I could spend so much time on a video; different cuts and different costumes, no one sees it!” she says.

“People do not want to see me work hard. It’s different in TV and movies, people wanna see the big production. But online, people don’t wanna see all of the effort you put in, they wanna see you be silly for five seconds.”

Einbinder and Stalter also dive into their unique styles of comedy, how the pandemic impacted their careers and their hopes for the second season of Hacks.