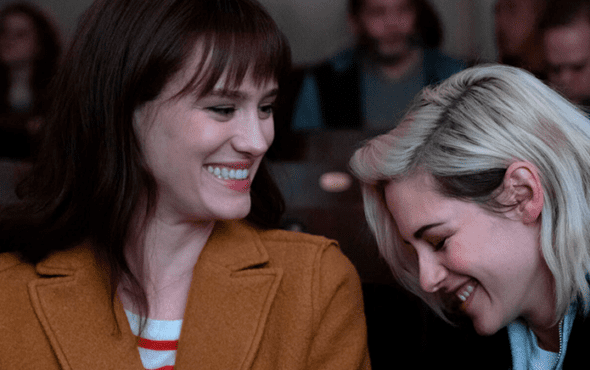 Courtesy of CTMG via People

The film follows the story of Abby (Stewart), who plans to propose to her girlfriend Harper – played by Terminator: Dark Fate star Mackenzie Davis – while attending Harper’s annual Christmas party, only to discover that she hasn’t yet come out to her conservative parents.

“I’m a huge fan of Christmas movies, but I had never seen my story represented,” says DuVall, who co-wrote and directed the film. “Happiest Season felt like a great opportunity to tell a universal story from a new perspective.”

Stewart agreed, telling People: “I think I’ve wished to see a gay Christmas rom com my whole life. I’m so happy and proud of Clea for bringing this into the world.

“I love when a holiday movie makes you long for an idea of home, but also examines how hilarious and hard reality at home can be sometimes.”

DuVall also said that Happiest Season was “one of the most fun sets” she’s worked on throughout her career so far, “from the cast to the crew, everyone showed up each day with an excitement and energy that made every day a joy.”

“We couldn’t have had a better more loving pack of weirdos supporting each other on this one,” added Stewart. “Had an absolute blast.”

All I ever wanted was a holiday movie that represented my experience so I decided to make one. Here’s a first look at @HappiestSeason courtesy of @people!!! ❤️💚🎄💚❤️ pic.twitter.com/91jQ9kEDkH