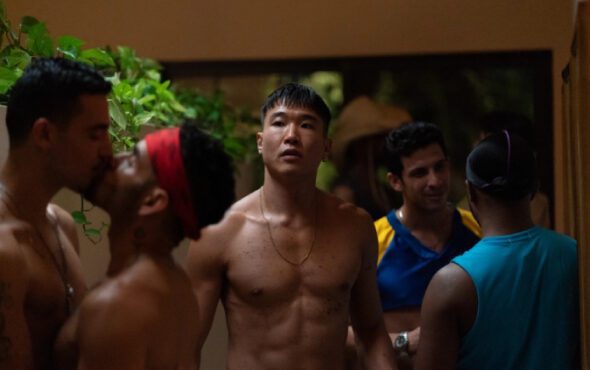 The film, which is inspired by Jane Austen’s famous novel Pride and Prejudice, follows Noah (Booster) and his group of friends who take off on a week-long vacation at the titular LGBTQ+ hotspot.

Booster, who wrote the film’s script, opened up about the upcoming project in a lengthy interview with Vanity Fair.

“We made something really, really special and unique and gay,” he said. “The fact that we did that feels miraculous, considering what we’re up against.”

The 34-year-old then revealed that his first-ever trip to Fire Island with Yang inspired his queer Pride and Prejudice retelling.

But it wasn’t until he wrote an essay on his personal connection with Austen that his idea truly took off.

“My Comedy Central pilot had been passed on – I was so depressed – and my agent was like, ‘You should write a show that’s based off this essay,'” he told the publication. “I was like, that’s the dumbest idea you’ve ever had, David. Don’t ever talk to me again. That’s so stupid.”

He went on to say that the film was initially conceptualized as a half-hour comedy called Trip.

After pitching the pilot, the series was picked up by the streaming service Quibi – which shut down in December 2020.

“The day I found out Quibi was folding, I was like, ‘Oh that’s it, there goes that,'” he explained.

However, the queer project didn’t stay in limbo for long and was later picked up by Fox Searchlight.

Alongside its romantic comedy plotline, Booster told the publication that the film would highlight race, class and oppression within the LGBTQ+ community.

“What happens when gay men are put together on an island and there are no straight people to oppress us? How do we oppress each other,” he said.

Towards the end of the interview, the comedic talent revealed his hopes for the film and its impact on the LGBTQ+ community.

“I want people – especially gay men, especially queer people – to walk away from the movie happy that they’re gay,” he said.

“I want people to come away from this movie feeling joy of our experiences and that it’s not all tragic. There are many of us out here living our lives joyfully.”

Fire Island is set to drop on via Hulu on 3 June.