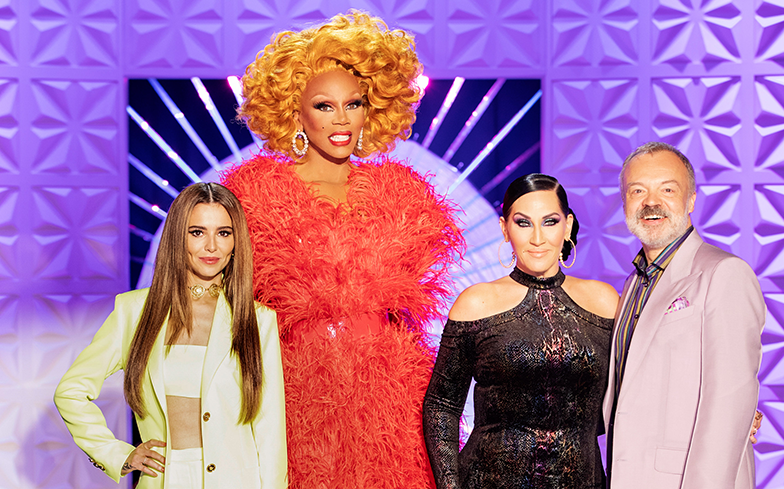 The Girls Aloud star will make her debut on the Emmy-winning series for the sixth episode of the gag-worthy British spin-off, which will air 7 November on BBC Three and iPlayer (here’s where you can watch in America).

When we spoke to Cheryl earlier this year at Manchester Pride, she said she “stared at Ru the whole time” during her stint.

“Obviously our queens are amazing, but it was the first time I’d ever met Ru and I was just in awe of him. I’m excited for it to be finally coming to the UK,” she told us. “I’m a massive fan of the show. Obsessed.”

We asked Cheryl who some of her favourite queens from the show are so far, to which she immediately named Alyssa Edwards and did the queen’s trademark tongue pop. “I like the big characters,” Cheryl continued.

“I actually also like the annoying ones. Silky Nutmeg Ganache was annoying, but she had some funny quips. I also love the very fishy ones, like Valentina. I know people have a lot to say about her, but she is stunning. She looks like a Vogue model.”

See the first-look photos of Cheryl as she sits side-by-side with Graham Norton, Michelle Visage and Mama Ru below.

On this week’s episode of Drag Race UK, the queens will be split into two teams for a girl-group battle. They will be aided by Grammy-nominated singer-songwriter and producer MNEK, while Little Mix alum Jade Thirlwall sits on the panel.

The remaining queens competing for the title of the UK’s First Drag Superstar are as follows: Baga Chipz, Blu Hydrangea, Cheryl Hole, Crystal, Divina De Campo and The Vivienne.