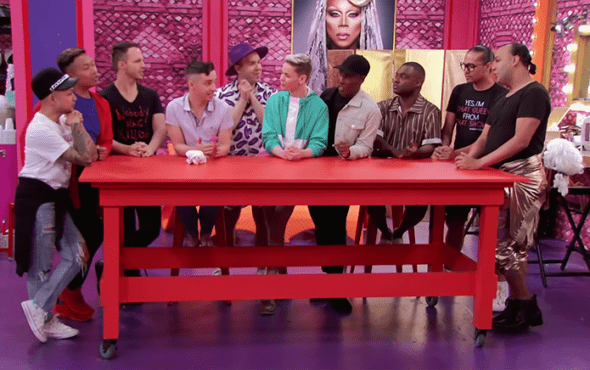 The eliminated queens make their long-awaited ruturn in the Drag Race All Stars 5 finale preview.

Following the events of last week’s episode, which saw Blair St. Clair get kicked to the curb and lose out on a place in the top three, Jujubee, Miz Cracker and Shea Couleé sashay back into the werkroom and celebrate their journey throughout the season.

“Every single one of us has something to prove,” Shea states in her confessional. “I know that they want this just as bad as I do, so it’s going to come down to who has the fight. We’ll find out.”

The next morning, all seven of the eliminated contestants – Derrick Barry, Ongina, Mariah, Mayhem Miller, India Ferrah, Alexis Mateo and Blair – sashay back into the werkroom and hide behind a gigantic glory hole (because Ru knows her girls so well), before emerging and reuniting with the queens who gave them the chop.

“The whole family is back together!” laughs RuPaul. “You’re probably wondering why all the eliminated queens are back. Well… the answer is simple. I didn’t want anything left unsaid. You know how families are. Plus, they’re here to back you up in your final lap of this competition.”

Ru then informs the queens of their final maxi-challenge: to write, record and perform a verse for RuPaul’s “sassy” new dance anthem, Clap Back, and to serve choreo, choreo and even more choreo with the help of special guest star Todrick Hall.

“For our grand finale, the only lip-sync assassins will be you, and the winner of the lip-sync for your legacy will slay her way into the Drag Race Hall of Fame,” she continues. “Ladies, this is still anybody’s game to win, so don’t fuck it up.”

It’s likely that the queens will spill the T on the drama and conflama between Alexis Mateo and India Ferrah, as well as Miz Cracker and Ongina, and then live their dreams as back-up dancers (All Stars 3 vibes) for the top three’s final extravaganza. Will the conflict between the contestants reach the same levels of goopery and gaggery as the infamous All Stars 2 mirror scene? Can the the Clap Back performance top Read U Wrote U? We don’t know. We’re not scientists.

The final episode of RuPaul’s Drag Race All Stars 5 airs this Friday on VH1 in the United States, and Saturday on Netflix in the United Kingdom.