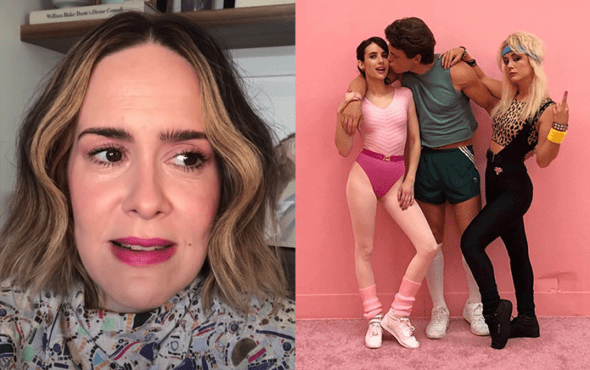 In a recent video for Harper’s Bazaar, the actress responded to conspiracy theories and speculation about her various projects, including her brand new Netflix series Ratched, Oceans 8, and of course, American Horror Story.

When one fan re-iterated Ryan Murphy’s comments about the season 10 theme being hidden in 1984, Paulson whispered into the camera: “I didn’t watch that season because I wasn’t in it, and I’m a narcissist, so…”

The star broke the internet when she announced that she wouldn’t return for the show’s ninth season, as it marked the first ever instalment of the acclaimed horror anthology series without her involvement.

At the time, Paulson didn’t reveal specifics around her departure, although fans assumed it was down to her other commitments, which included another season of American Crime Story and a starring role in Ratched.

Earlier this year, she revealed that it was due to her role in Hulu’s historical drama, Mrs. America, which also starred Cate Blanchett, Rose Byrne and Uzo Aduba.

Speaking to Vulture, Paulson said she was interested in the part because “the writing was extraordinary — the time period, the subject matter, and the idea of playing a person so different from where my head and heart live politically.”

She continued: “So I went to Ryan Murphy and I said, “Do you mind if I sit this season out? I want to do this instead,” and he very graciously said yeah.”

Paulson will make her return in the highly-anticipated 10th season, which was – like other productions – put on hold due to concerns over the coronavirus pandemic.

In the video for Harper’s Bazaar, one fan speculated that the theme will be “Aliens and Area-51,” which led to Paulson smirking in silence before ‘pleading the fifth’.

Murphy recently teased the direction of the season with a photo of razor sharp, vampire-esque fangs, writing on Instagram: “Looks like American Horror Story Season 10 is go for an October (fitting) production launch. Thanks to everyone who is working hard to assure a safe start for the cast and crew. And yes this is a clue.”