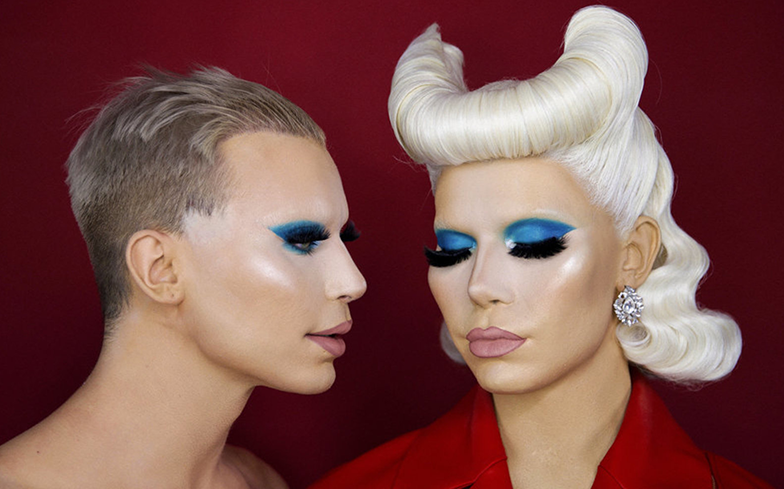 “Drag Race is an option, it’s not for everyone.”

Earlier this year, Alexis Stone gagged the entire world (those of us on social media) when she revealed that her extreme ‘surgical transformation’ was in fact fake, and that it was actually a mask created by the award-winning artist, David Marti.

The Manchester-based drag performer, who’s known on social media for her makeup skills and extraordinary illusions of celebrities, stunned us yet again back in July when she revealed a four-month-long stunt called The Replicant.

Alexis created a replica of her face, and used it every single time she uploaded a photo or video to Instagram. Months went by and no one clocked that it was a prosthetic, which begged the question: is anyone really paying attention?

“It raises more questions than answers,” she tells us. “I just didn’t want to do my makeup anymore. I feel like, especially with Instagram, you really can’t get people’s attention unless you tear your face up or smash your face in with an axe.

Like her previous project, The Replica received widespread praise from the media. Despite this, Alexis says doesn’t have a particular aim with her work because “it’s not appreciated”. Therefore, she’s doing it all for herself.

“If it’s appreciated then that’s a cherry on top, but we’re all going to be dead one day and no one’s going to remember,” she continues. “So enjoy it in the moment and spend all your money making mannequins and then smashing it.”

Alexis is the prime example of a drag performer in 2019 who has succeeded without the help of Drag Race. She boasts over 800k followers on Instagram (more than several of the show’s contestants) and has just launched her own make-up line.

“Drag Race is an option, it enables queens that love performing to make thousands of pounds per booking, but it’s not for everyone,” she explains. “The show works its purpose, but it’s just a TV show.”

Alexis says she recently met with the cast of Drag Race’s upcoming British spin-off (which she’s not interested in appearing on) and Michelle Visage, who told her that she didn’t need the show.

“I recently met Michelle Visage because I went and saw some of the girls backstage, and I spoke to her about it and she just said, ‘You don’t need it. You get the same opportunities, the same money, you travel the world.’

“I think if you’ve got a product, and you have something to offer they world, just showcase it with social media. Your work reaches everyone around the world. Some of the most amazing artists around the world recognise me.”

Last week, Alexis unveiled her third gag-worthy project of the year. The star announced her sickening Alexis Stone X Revolution collaboration, and posted a video crashing her own launch party – in a hilarious disguise. Watch below.