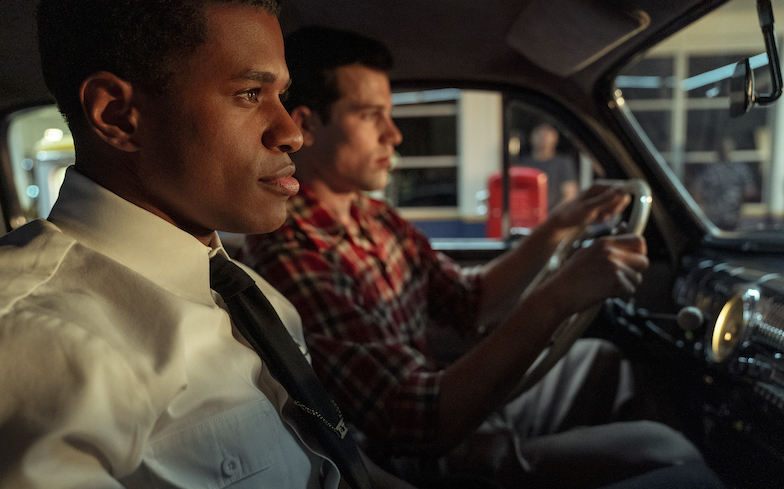 Do us a favour and ignore the negative reviews.

Good news! This week, Netflix will be satisfying our need for more binge-worthy content in the wake of the coronavirus with the release of Hollywood, the second of ten planned projects between the streaming service and Ryan Murphy.

The seven-episode limited series, which Murphy co-created with Ian Brennan (Glee, Scream Queens, The Politician), follows a group of young aspiring actors and filmmakers as they try to catch their big break in a post-World War II world.

Each character offers their own glimpse into Hollywood’s Golden Age, while the series itself highlights the racism, sexism, homophobia and decades-old power dynamics that are still prevalent in the entertainment industry today.

Over the past two decades, Murphy has made his mark on television with iconic comedies such as Popular, Glee and Scream Queens, Emmy Award-winning anthologies American Horror Story, American Crime Story and Feud, and broken boundaries for queer POC representation with Pose. We’re going to say it: Hollywood is up there with the best of ’em. Why? See below.

It launches a whole new generation of stars

Whoever is in charge of casting over at Ryan Murphy’s production company deserves all the bloody praise they can get. Just like American Horror Story, Glee and Scream Queens, several of Hollywood’s cast members are incredibly talented (and likeable) rising stars who are about to make it big in the industry. Jeremy Pope – who just made history at the Tony Awards with two nominations in a year – impressed Murphy so much that he’s been cast in a “straight role” for the third season of Pose, one of the most critically-acclaimed dramas on television. Samara Weaving, who earning praise for her final girl performance in Ready or Not, has her eyes set on blockbusters with the upcoming action film, Snake Eyes, while Laura Harrier, who boasted a small role in Spider-Man: Homecoming, will star alongside Tom Hanks in sci-fi drama Bios. David Corenswet is being touted as the next Superman thanks to his farm-boy looks and jawline, and Jake Picking will join Tom Cruise in the long-awaited Top Gun sequel. “How the hell did Ryan Murphy get all these stars in one room?” is the question audiences will be asking in ten years time.

The seasoned actors give career-best performances

While the rising talent boast incredible work in the series, ultimately, it’s the seasoned stars who are most likely to earn critical acclaim and awards galore. The Big Bang Theory’s Jim Parsons adds yet another iconic role to his impressive repertoire as Henry Willson, the real-life sleazebag talent manager known for coercing his roster of clients into sexual relationships in exchange for film roles, including Rock Hudson, Tab Hunter and Chad Everett. Tony-winning actor and director Joe Mantello boats his finest on-screen performance to date as studio executive Dick Samuels, while Emmy-winner Holland Taylor brings nuance to another hard-as-nails, career-focused character. While we would’ve enjoyed more screentime for American Horror Story’s Dylan McDermott, he does manage to steal every scene he’s in as gas station owner slash brothel boss, Ernie.

Besides Pose, it delves into race and sexuality more than any other Ryan Murphy show

Since rising to fame in 1999 for writing, directing and creating the massively underrated television comedy Popular, Ryan Murphy has become widely known for his diverse and inclusive roster of stars and characters, such as in Glee, American Horror Story and Pose, the latter of which features the largest amount of trans actors in regular roles of any scripted television series in history. Hollywood doesn’t break as many boundaries as Pose, but it does rank as one of Murphy’s most topical projects to date. Set in a post-World War II world, Hollywood examines the racism, sexism and homophobia that are still rife in the world of entertainment in 2020, while Jeremy Pope’s character, Archie Coleman, explores the issues faced by people living at the intersection of being gay and a person of colour. The show also reflects on the lack of Asian leads on the big screen with Michelle Krusiec’s stunning performance as Anna May Wong, and the toll that being in the closet can take on those in the entertainment industry.

We said it once and we’ll say it again: the performances in Hollywood are outstanding. The fact that several publications are ‘awarding’ the series one or two stars out of five is totally unjust – yes, unjust! – when the performances are worth three stars alone. Miss Patti LuPone, however, is in a league of her own. As leading lady Avis Amberg, the neglected wife of powerful studio executive Ace Amberg (Rob Reiner), the legendary actress delivers a feminist icon for the ages as she subverts expectations of women and archaic gender roles in the Golden Age of Hollywood. It’s hard to continue without giving too much away, but we’ll say this: if Hollywood doesn’t return for a second outing, it would be an absolute waste for this character to be confined to a limited, seven-episode series. Patti LuPone has never received an Emmy Award – can you fucking believe – and if there’s any role that will get her that statue, it’s Avis Amberg.

Hollywood hits Netflix on 1 May – watch the trailer below.