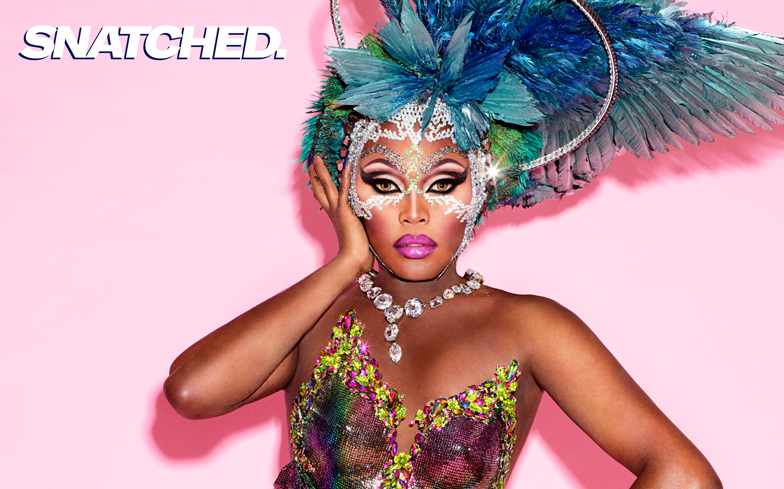 In 2018, Asia O’Hara competed on the groundbreaking tenth season of RuPaul’s Drag Race and became one of the most beloved contestants in the show’s HERstory. The Texan performer sashayed into the werkroom with a legendary background in the pageant scene (she had won 11 prestigious titles) but later proved she could combine both comedy and glamour.

Despite being a frontrunner for the crown, Asia failed to advance to the top two during the show’s lip-sync smackdown for the crown. The revered performer planned to reveal a number of hidden butterflies from her wrists and chest, but unfortunately, the insects never got to – let’s just say – fulfil their potential. ‘Twas a gag.

Although it was a devastating moment for Asia, it earned iconic status – ultimately earning a MTV Movie and TV Award nomination for ‘Best Meme-Able Moment’. She tells us: “Everything happens for a reason, but in that moment it was shocking. In the grand scheme of things, I have been blessed with a marvellous career.”

Earlier this year, Asia launched an assault on the charts with her debut single Queen for the Night and the follow-up, Crown Up, an empowerment anthem for queer people to “remember their purpose”. We caught up with the star and discussed her music industry debut, travelling with Werq the World and All Stars.

We love your new single, Crown Up – what was the inspiration behind the song?
Crown Up was inspired by me trying to find myself and live up to my full potential, and do what came here to do. I knew that multiple people needed that encouragement. The song is for people to wake up in the morning, put their crown on and remember their purpose. You’ve released two singles so far – can we expect an EP or an album to follow soon?
Absolutely! Music is something that I definitely enjoy and love, and one of the great things about drag is that if you play your cards right, you get to play hand in every aspect of the creative process. So music is probably one of the last slithers of my drag persona that I haven’t dived into fully. I’m just getting my feet wet!

It feels like the music industry doesn’t take ‘drag music’ seriously – why do you think this is?
I think it’s not taken very seriously because drag has had to take inspiration from other avenues of art. So I don’t think it was initially taken seriously for that reason alone, but I think people know that those who do drag are some of the most creative people, so it seems fitting and a natural right of passage for queens to move into the music industry.

What about the movie industry? Can we expect Asia in a film? It looks Anna Hathaway is down…
[Laughs] I definitely hope to! I try to go into every single opportunity I get with an open mind, and to get to know people within the industries. I know not every opportunity will work out, but I don’t want to just have one career path for myself without looking at all the opportunities that come my way.

Have you received any compensation from RuPaul for his brutal attack in the mini-challenge?
Well… we are still in litigation, so I’m not allowed to speak on it. But have I received anything? No!

You are owed thousands of doollahz.
Yes absolutely. Agreed!

A year on, how do you feel watching back the lip sync showdown for the crown?
Everything happens for a reason, but in that moment it was shocking. In the grand scheme of things, I have been blessed with a marvellous career and so the problems of today will just seem like a drop in a bucket a year from now, and so that moment now is just a drop in a bucket.

I know it didn’t turn out the way you wanted, but it did become one of the most iconic moments in Drag Race history.
Yas! Definitely!

You recently tweeted that you didn’t watch the season 10 reunion episode, is that right?
Sometimes a lot of queens do not watch certain episodes just because of whatever was happening on that particular day it aired. The thing is, I was there at the reunion and remember everything that was said, so I didn’t feel as compelled to watch it because I lived it. I was there the whole time. Throughout Drag Race’s history, queens of colour face more hate from fans than their white counterparts – what do you think we can do to combat this hate in our community?
I think that the people who are in a position to influence should take some responsibility. These people have the power to influence a large number of people and they need to take that seriously. So I think the people that are in a position to influence these people and their minds need to step up to the plate. The people who try to combat are the ones who are affected by it, which doesn’t really work because their fan base and audiences are the ones that are already on the same page, like-minded people. Those people who not affected by it are the ones who should be made accountable for the people who follow them spouting this negativity.

Fans have called you you to be on All Stars 5, are you up for it in the future?
I don’t really have an exact answer for that. I’m not not up for it, but then I’m not gung-ho about it. I’d very much like to explore all my opportunities. But if the timing is right, then yes. If timing is wrong… then we’ll see. I’ll use Trinity [The Tuck] as an example. Prior to being on All Stars 4, she was set to be on the previous season, but the timing was just not right for her. She went back to the following season and won, so we’ll see. Also, the fans sometimes have it exactly right, but sometimes they are dead wrong!

In the past year, you’ve travelled the world with the Werq the World Tour – how has that experience been?
Travelling with Werq The World is awesome. It’s a little family and we all get to know each other. We eat together, sleep together, work together! It’s a lot of fun, and one of the most gruelling parts of drag is creating new content and creating new pieces for your wardrobe. So one of the great things about Werq The World is that we are performing the same show every night in a different city, and I know the show doesn’t change much, but it gives you the opportunity to focus on other parts of drag – not stressing about what to wear tomorrow, or what song I’m performing to. This year marks the 50th anniversary of Stonewall – how important are Pride events for you as a queer performer of colour?
Pride has always been important for me, especially as a baby drag queen. It was one of my first events. I remember being included the first time and realising that I was part of something much larger than me. I always go back to that moment. With Pride, I see it as a time to celebrate how far we’ve come, an aspect that is sometimes forgotten. It brings together people from all corners of the community and even people outside of the community to celebrate what we have in common.

Do you think there is still a lack of education within our community in regards to how we gained our rights? Because it seems like people view Pride as just a party.
I don’t think it’s a lack of education, but there is a lack of interest in people to really understand where our rights came from. I’m not the person whose job it is to educate other people, but I think it’s important to self-educate yourself on the community you’re a part of and surround yourself with like-minded people.

And finally, what can we expect from Asia O’Hara over the next year?
I definitely will be working on some new creative content. Obviously, new music, but also working on some things that are very fashion driven that will be premiering this fall. I’m also on the creative team for Werq the World which takes up a lot of time! I’m just always trying to create new and exciting things for people to see and enjoy.

Watch the video for Asia’s sickening new dance anthem, Crown Up, below.