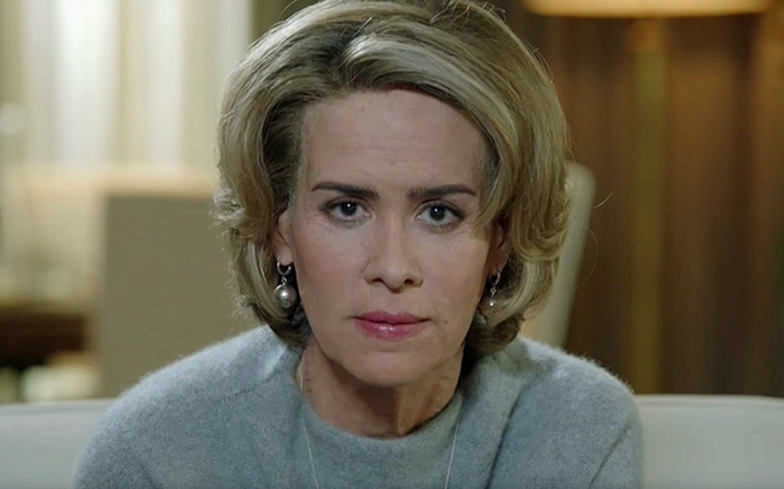 Will Sarah Paulson come back for the American Horror Story: 1984 finale?

Despite confirming that she wouldn’t be making an appearance in this year’s season of Ryan Murphy’s hit horror anthology series, some fans are convinced that Sarah will be making a cameo in the finale of 1984.

In the teaser trailer for this week’s episode, titled Final Girl, eagle-eyed viewers spotted a brief scene where Brooke (Emma Roberts) appears to be recounting the horrors at Camp Redwood in an interview setting.

Some fans are now convinced that the person interviewing Brooke is Lana Winters, the journalist from Asylum played by Sarah Paulson. Considering the character returned for Roanoke, and was also referenced in Cult, it wouldn’t be a shock if she popped up once more.

“If Lana Winters is the one interviewing Brooke in the finale, I want y’all to know that I predicted that shit,” wrote on fan on Twitter.

“I’ll literally do anything to have Lana Winters interview Brooke in the AHS 1984 finale, pls Mr Murphy don’t clown us,” added another.

Unfortunately for fans, Sarah has since taken to Twitter to deny the rumours, replying to a fan’s speculation with a simple, “Not true”.

But that hasn’t dashed hopes for everyone.

“That’s exactly what Sarah Paulson playing Lana Winters in the finale would say,” joked one fan.

It also wouldn’t be the first time an American Horror Story star has lied about making a comeback. Remember when Angela Bassett said she was “in [her] feelings” about not being in Apocalypse, and then popped up in the finale?

We’re keeping our fingers crossed, and you can find out if Sarah/Lana really does make a cameo when the finale airs later this week.

In the meantime, fans will be glad to know that Finn Witrock is making his long overdue return to the franchise for the finale episode. It’s unknown who he’s playing, but some have speculated it’s a grown-up version of Mr Jingles’ son Bobby.