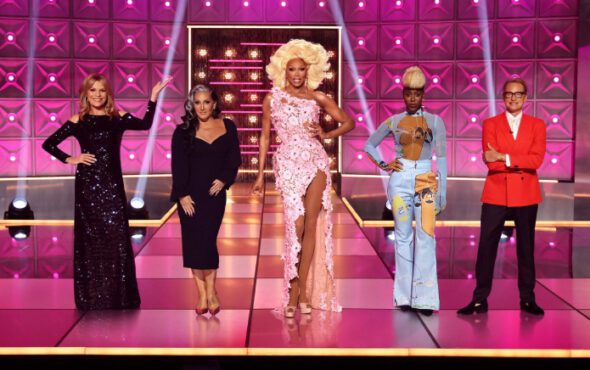 On last week’s episode, the eight winners flexed their best impersonation skills for not one, but two Snatch Game performances. The episode received near universal acclaim and made herstory as the franchise’s top-rated episode on IMDB.

For her Oscar-worthy tribute to Judy Garland, as well as her eerily accurate impersonation of Russian Doll’s Natasha Lyonne, Jinkx Monsoon received 10s, 10s, 10s across the board from the panel – and social media – and won her first Legendary Legend Star.

In the lip-sync showdown to Adele’s Rumour Has It, Jinkx faced off against Trinity the Tuck, who was blocked from receiving aforementioned star in the premiere by her season nine sister Shea Couleé. After impressing the judges with her comedic turn, Jinkx ‘awarded’ the Platinum Plunger to Shea.

The latter required the queens to concoct a look made from materials in a single colour palette inspired by a vacation destination, a reference to the vacation prize packages that are often awarded on Wheel of Fortune.

While all the queens were commended for their looks, including Jinkx, who had difficulties with her vision (and the sewing machine), it was Shea, Raja, Trinity and Jaida Essence Hall who were singled out for praise.

Trinity and Jaida earned top marks, both winning their first Legendary Legend Star in the process. The subsequent lip-sync smackdown to Beyoncé’s Green Light left the panel and remaining winners in awe. As Jaida prepared to ‘gift’ a queen with the Platinum Plunger, she admitted in her confessional that she doesn’t “want to think too hard about strategy” like her fellow contestants because she’ll “confuse” herself.

Ultimately, Jaida chose to block last week’s winner Jinkx from earning another Legendary Legend Star, to which the season five winner responded: “You know what? I deserve this.”

On next week’s episode of Drag Race All Stars 7, the winners will improv their way through “the enchanted TV court show, Fairytale Justice”.

Here’s how social media reacted to the All Stars 7 Ball:

this season of rupaul's drag race all stars s7 is the best season of the whole franchise – you cannot change my mind.

Girl this season of #AllStars7 is absolutely killing it. I know we’re all suffering from Drag Race fatigue but I am reinvigorated!

#dragrace oh bitch raja deserved to be in the top 2 this week come on that 3rd ball look was LEGENDARY (jaida winning is great though, she KILLED it!! just wish raja was the other top queen this week)

The Vivienne winning $1500 by spinning a wheel, and winning more then when she won Drag Race i can't 😭

#AllStars7 is just getting better and better every week! none of them has flopped the first three episodes yet and i am living for it!! that's why they're called WINNERS for a reason ✨✨✨ #DragRace #RuPaulsDragRaceAllStars7 pic.twitter.com/vbogiMJfkK

ngl if not for her second look, she could've been on the top with jaida but the fact that she made all of this from scratch just proves how talented she is. and she's right when she said "for fuck's sake, i'll give myself a SHOOT" 🤭 #AllStars7 #DragRace pic.twitter.com/JDVuLnvsd6

Drag Race spoilers, so LOOK OVER THERE!

Jaida was truly magnificent this week. She made it look so easy! Also i feel people judge Trinity at another level – she’s effectively come third, then top two twice. She is insane and could absolutely demolish these girlies. #DragRace

This is the best season of drag race ever.

raja served it once again and could've easily had 2 badges under her belt by now… #DragRace #AllStars7 pic.twitter.com/RgeFouhduH

Having @sutanamrull on drag race again has been nothing but a pleasure and she is an absolute treasure ❤️ love love love RAJA. The very first queen to have me in a chokehold 🥺 https://t.co/yqESO8Xhqj

TBH
I think the top 2 should've been Raja & Trinity

But hey, thats just me..
I loved the lip syncs tho between Jaida & Trinity #DragRaceAllStars7 #DragRace pic.twitter.com/y34uxdm6QD