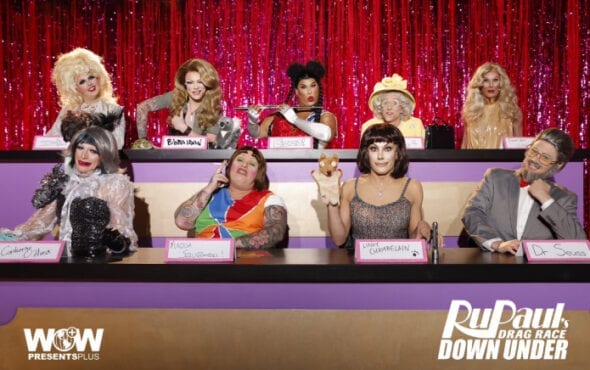 The line-up for Snatch Game on RuPaul’s Drag Race Down Under has arrived early!

The next episode of the spin-off will see first-time impressions of several iconic celebrities, a few of which have been fervently championed by fans over the years, including Dolly Parton, Jennifer Coolidge and Catherine O’Hara.

World of Wonder released an exclusive photo from the set of the fan-favourite maxi challenge, which shows Karen from Finance take on the legendary country superstar and Scarlet Adams as the Legally Blonde and A Cinderella Story actress.

An accompanying clip shows most of the contestants, including Karen, Scarlet and Maxi, making RuPaul unleash his signature cackle while Elektra’s depiction of O’Hara and Kita’s embodiment of Seuss fails to bring in the laughs.

Although Snatch Game usually features real celebrities on the panel, Michelle Visage and Down Under’s new permanent panellist Rhys Nicholson will be playing with the contestants, presumably due to coronavirus restrictions.

You can check out the teaser for Down Under’s Snatch Game here or below.

Drag Race Down Under airs every Sunday on BBC iPlayer.