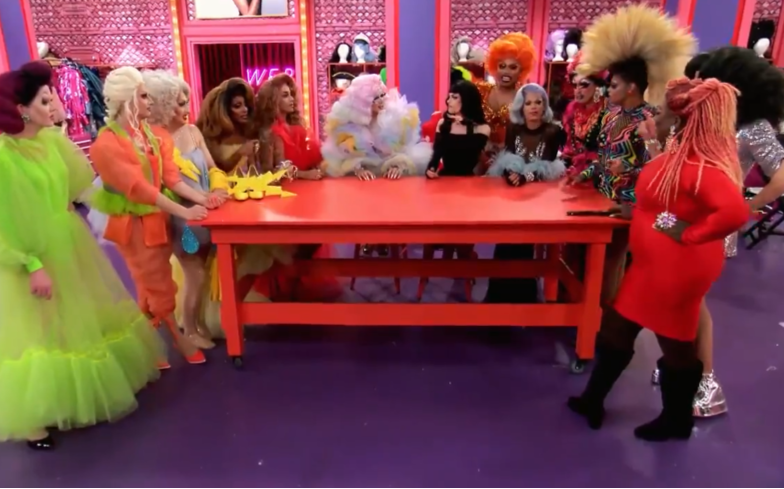 And honey, she was not happy!

High drama has already been set for this season of Drag Race, as the eliminated queen “stormed off” following her elimination.

This week, the two groups of queens met for the first time, and while last week’s queens were open about their spats during their rehearsal, the other group tactically chose to conceal their arguments.

The competition immediately heated up when RuPaul asked the two lip sync winners to rank the other competition from tops to bottoms, giving us Drag Race UK flashbacks. Both queens put the other top queen as their biggest competition, while Widow Von’Du chose Aidan Zhane and Jaida Essence Hall chose Heidi N. Closet as their worst competition.

Although Aidan was unbothered by Widow’s placement, Heidi was seething.

These placements formed the groups for this week’s maxi challenge where the queens flexed their improv skills as they audition for ‘World’s Worst’ – a talent show for people with little talent.

The queens then performed in front of Ross Matthews, singer Charo and Season 6 breakout star, Ornacia. Team Heidi were hi-larious as the Del Rio Triplets, three songstresses approaching 80, as Gigi seemingly died at the beginning and Heidi and Jackie attempting to get through the rest of their performance while fooling the judges into believing she was still alive.

After the runway theme of buttons and bows, Widow, Jaida, Jan, Rock, Gigi, Aidan and Brita were all declared safe. Sherry was named the winner of the challenge, while Heidi and Jackie were placed high. Crystal was critiqued over using the same make-up, but was ultimately declared safe seeing Dahlia and Nicky lip-sync to Ariana Grande and Iggy Azalea’s Problem.

The lip-sync certainly didn’t slay like the previous two and Nicky was declared the winner. But instead of sashaying way, Dahlia stormed off, forgoing the usual parting message, and telling cameras she was “over it.”

Next week, the queens are throwing a ball, with well… lots of balls. And Leslie Jones will be on the judging panel, and from that small trailer, she is LIVING for it!