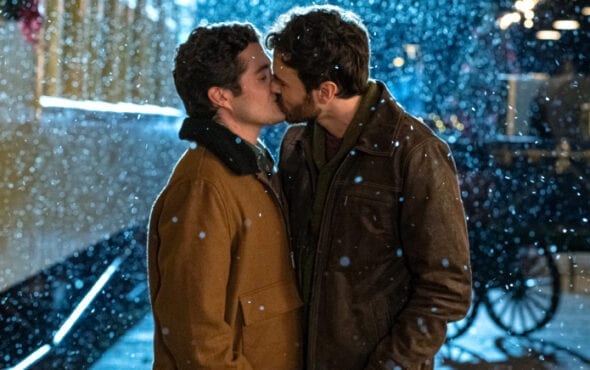 Are you ready for more holigay fun?

The Christmas Setup has received an air date in the UK.

Following its premiere in the United States on Lifetime over the weekend, the LGBTQ+ holiday film has been confirmed to air Thursday (17 December) in the UK on Channel 5 at 3.15pm.

Ben Lewis, known for his role as William Clayton on Arrow, plays an NYC-based lawyer who returns home to Milwaukee to spend Christmas with his best friend (Ellen Wong) and mum (Fran Drescher).

Unbeknownst to him, Madelyn has arranged for Hugo to run into his high school friend and former crush (played by Lewis’ real-life husband Blake Lee), who has returned from a successful stint in Silicon Valley.

The official synopsis reads: “As they enjoy the local holiday festivities together, Hugo and Patrick’s attraction to each other is undeniable and it looks as though Kate’s Santa-style matchmaking is a success.

“But as Hugo receives word of a big promotion requiring a move to London, he must decide what is most important to him.”

In an interview with TV Line, Lewis hailed The Christmas Setup as the “first LGBTQ+ Christmas movie that Lifetime has made,” but acknowledged that it only represents “the ‘G’ in the LGBTQ+”.

“So I hope that we’re just opening a door for queer people of color, trans people, gender non-binary people to see themselves represented,” he explained. “It’s so great that, only in this year, there are four prominent queer Christmas movies being made and being released. It’s just important that it’s not a trend, that people say like, ‘Oh, well, we made the gay movies. Now we can move on.’ This is just the beginning.”

The star also praised Lifetime for hiring LGBTQ+ talent on and off screen.

“Blake and I being a real couple plays a big role in that, as well as having not just two openly gay actors play the lead roles, but also having a gay writer, having a gay director, having a gay executive producer,” he said.

“You can only make your first LGBTQ Christmas movie once. I think they really wanted to get it right.”

The Christmas Setup premieres 17 December in the UK on Channel 5 – watch the trailer here or below.