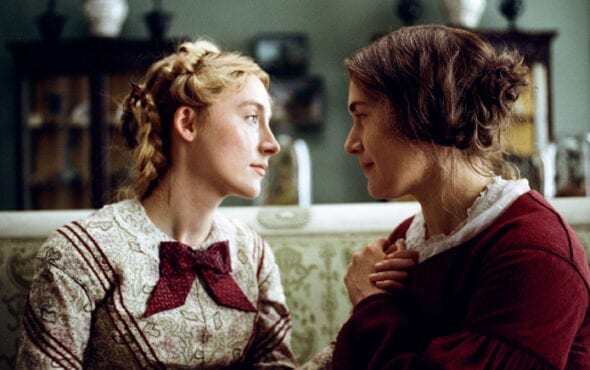 Francis Lee’s brand new epic stars Winslet as famed fossil collector and palaeontologist Mary Anning, whose work is credited with contributing important changes in scientific thinking about prehistoric life and the history of the Earth.

Set in an English coastal town in the 1840s, the film will chronicle Mary’s search for common fossils, which she plans to sell to tourists to support herself and her sickly mother.

Although the two clash over their personalities and social classes, they embark on an intense romance that will change the course of their lives forever.

With cinemas remaining closed in the UK due to COVID, Ammonite will skip a traditional theatrical release and will now land on digital platforms from 26 March.

Following its premiere at the Toronto International Film Festival on 11 September 2020, Ammonite earned highly positive reviews for the chemistry between Winslet and Ronan, and landed on several publication’s end-of-year lists.

Lee, who received universal acclaim for the BAFTA-nominated gay drama God’s Own Country, wants his second film to help audiences realise “the power of love; the power of a deep, intimate, human relationship; the power of touch; and hope.”

In a recent interview with Entertainment Weekly, the director said he was drawn to the film’s time period because “this wonderful research into same-sex female relationships of the period are all very well documented with letters to each other, demonstrating wonderful, life-long, passionate, intense, emotional relationships.”

He continued: “And I was fascinated to set this film in a period that was totally patriarchal and where women were completely owned by their fathers or their husbands, and looking at how they live within that world, and also in a world where, at that time, the medical profession believed that women had no sexual-pleasure organs. So, the idea of two women actually in a relationship together was just not a thought anybody ever had within society.”

Following comments made by Barbara Anning – Mary’s distant niece – who said there “was no suggestion” that the fossil collector was a lesbian, Lee clarified that Ammonite is not an official biopic. “It’s just inspired by her life,” he explained.

“I was incredibly lucky to work with Kate Winslet and Saoirse Ronan, and they play two women who develop an intense and intimate relationship.”

Ammonite also stars Fiona Shaw, James McArdle, Gemma Jones, and Alec Secăreanu. You can watch the trailer here or below.