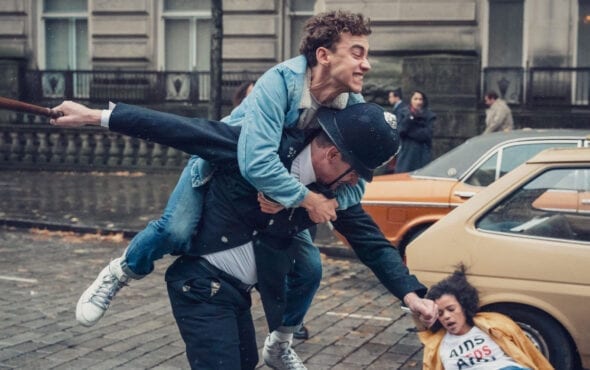 We have a release date for It’s A Sin.

The upcoming LGBTQ+ drama, which follows a group of friends in 1980s London who grow up in the shadow of the HIV/AIDS epidemic, will premiere 22 January on Channel 4.

According to Radio Times, all five episodes will be available to stream on All4 immediately after.

Olly Alexander leads the cast as 18-year-old Ritchie Tozer, who leaves his home on the Isle of Wight to move to London in search of fame and success.

An official synopsis for It’s A Sin reads: “It’s 1981, the start of a new decade and Ritchie, Roscoe and Colin begin a new life in London.

In the latest issue of GAY TIMES Magazine, Davies went into detail about the highly-anticipated drama alongside cast members Olly, Lydia, Omari, Nathaniel and Callum.

“Everything that happens in the series is true in some shape or form,” explained Russell.

“Even little details. I watched it last night to remind myself and there really was a medical questionnaire that asked if you’d ever slept with animals.

“There really were people who died of what you thought was psittacosis, which is what parrots get.

“But specifically Jill [is based on truth] because she was a better human being than me. I had friends who died but she literally spent more time on the wards, she was a volunteer and all that stuff.

“She was just wonderful and in many ways dedicated her whole life to it.” Olly also revealed that Ritchie’s social and political views don’t always align with what we might expect from his character.

“When I read the script, that’s what really blew me away about Ritchie’s character,” he said. “I was so excited to try and get into his headspace.

In the new two-minute teaser, Richie questions the legitimacy of HIV/AIDS as he calls the epidemic “a pack of lies” and “a racket” as well as “a money-making scheme for drug companies”.

Breaking the third wall, he tells the audience: “Do you seriously think there is an illness that only kills gay men? It can calculate that you’re gay and kill you, but only if you’re gay and no one else?”

You can watch the latest trailer for It’s a Sin here or below.

My Queer Faves with L Devine