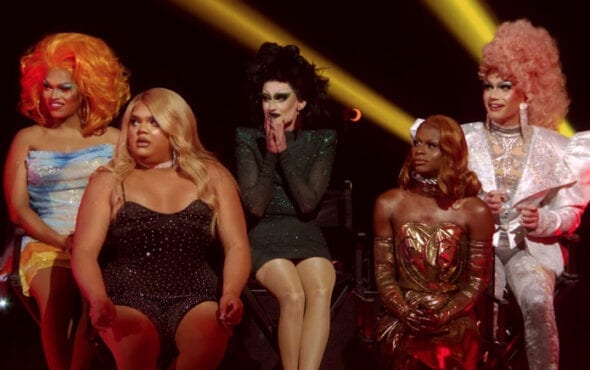 The latest episode of RuPaul’s Drag Race has been met with a polarized reception from social media.

During rehearsal, Utica caused controversy after making jibes about Michelle Visage and Loni Love’s weight. Although she was advised to steer clear from plus-size jokes in her set, and to focus on being funny, Utica proceeded to make whale noises towards Nina.

Later, she asked RuPaul to stand up due to her status as a “fashion icon”, referencing claims that the host changes into sweatpants when sat behind the panel, which led to Ru flipping the bird at Utica.

Although Utica wasn’t the only queen to make jokes about size in her set, some viewers accused the star of fatphobia. The reaction was split, however, as there were many who leaped to her defence – including past contestants.

Season six star and lip-sync assassin Trinity K. Bonet tweeted: “Reading means to be mean not nice. It’s a damn roast. The most sensitive people on this planet have become Drag Race fans… no one is safe now. IT’S NOT ABOUT YOU.”

Darienne Lake said a “roast is supposed to be offensive” and then hit out at the viewers who accused Utica of fatphobia but don’t follow plus-size entertainers, who are the “least followed on social media”.

Our reigning US queen, Jaida Essence Hall, told her followers: “I hope y’all ain’t out here spreading hate to none of the girls from an episode of a TV show last night.”

Shortly after the episode aired, Utica apologised for her performance and “especially” to Loni, Michelle and Nina, saying “the jokes were in bad taste and my attempt at roast humor was for the lack of better word, horrible.” “Making fun of people’s size is not okay. I’m truly sorry,” she tweeted, before calling the episode “uncomfortable” in an Instagram statement.

“I apologize to those who were offended by my crude jokes. I feel saddened that themes of body shaming are still prevalent in today’s TV, and I don’t want to perpetuate any body negativity with tasteless jokes,” she said.

Loni assured Utica that “no offense was taken” and that she thinks she’s “fabulous,” while Nina responded: “Babe! It is a roast, and we were all in on it and fully aware it was a roast. Give yourself a little grace.”

Michelle shared the same sentiments, telling Utica that she doesn’t need to apologise before reiterating her point that a roast has to be funny to succeed. “Honestly, don’t beat yourself up!” said the Steps star. “Love you.”

You can check out the reactions from Drag Race alum below.

A roast is supposed to be offensive. It’s also supposed to be funny. Don’t accuse others of fat-phobia when the fat girls are the least followed on social media. Look at yourself.

girl, don’t beat yourself up over this. you didn’t say those jokes in mean spirit, you’re just not funny and that’s ok. love u 💞

Not the same account fat shaming me, calling me a “fat c**t” trying to drag Utica for “body shaming”

Babe!!! It is a roast, and we were all in on it and fully aware it was a roast. Give yourself a little grace.

Utica, you do not need to apologize to me love, it didn't offend me, the point was just this: if you were gonna go for it, it had to be funny! Honestly, don't beat yourself up! Love you

You are fabulous Utica… it’s a roast so no offense was taken… I really enjoy watching you this season!! https://t.co/KEjTKKSMNx

I hope y’all ain’t out here spreading hate to none of the girls from an episode of a tv show last night. I really hope y’all aren’t. pic.twitter.com/E2cptNz6vq

Wow. Utica really put her foot in her mouth, didn't she? Speaking of feet in mouths, Nina West is here with us tonight!

I saw Utica’s roast performance many weeks ago and I have thought about it every day.

I will die on this hill. Utica’s you speak whale joke was funny.

Sooo I guess my invitation to the roast got lost in the mail? 🥺👉🏾👈🏾

My favorite part of the episode pic.twitter.com/W5z4bO5uHE

On next week’s episode, the top five queens will flex their acting chops in the brand new sci-fi adventure, Henny, I Shrunk The Drag Queens!