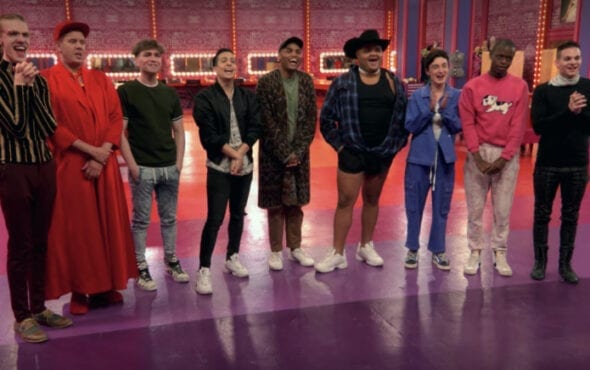 Bring on the chorus lines and tears hunny!

Drag Race season 13 has been a hell of a ride and episode eight proved to be another insane moment in drag herstory.

From the highly anticipated Rusical to the iconic Anne Hathaway appearance, the latest episode of Drag Race has been one for the books.

1: The Battle Ruyale for the role of Foxxy

For this weeks maxi challenge, the queens were tasked with giving Broadway-style performances for Social Media: The Unverified Rusical.

After the excitement subsided the contestants got to work, distributing parts, and preparing for rehearsals.

Each queen relatively secured the part they desired except Denali and Rosé.

After going back and forth for the part of Foxxy, Elliot with 2 T’s suggested that the two dance queens battle it out in a makeshift audition.

Both Denali and Rosé sang a piece of Foxxy’s solo which led to the other queens deciding that the latter would be best for the part.

The decision left Denali feeling defeated and stuck with the Russian fembot role.

“Sis I am frustrated boots, I am walking away from this audition completely defeated. I don’t even want to do this Rusical anymore,” she said.

After the Battle Royale for Foxxy, the queen’s rehearsal preparations were interrupted by none other than Academy Award winner and Drag Race fan Anne Hathaway.

Tina Burner asked Hathaway how to properly die in a musical to which the actress answered: “Just like don’t sneeze? I don’t know. Make as much noise as you can before you go.”

Denali went on to ask the actress how to perform a foreign accent.

“Sometimes people think of accents in terms of nationality. But you have to remember you’re not playing an accent, you’re playing a person.

“So if you can find a person that reminds you of your character, who has the same accent, that’s gonna make it seem a lot more fun,” she said.

During her appearance, Hathaway also revealed some inside tea on her role in The Devil Wears Prada.

When asked about parts that she had to “fight tooth and nail for” the actress revealed she was not the first choice for Andy in the iconic film.

“I will give you some T. I was the ninth choice for Devil Wears Prada. But I got it. Hang in there, never give up!” she exclaimed.

Since season six of Drag Race, viewers have been treated to an array of iconic Rusical performances.

Social Media: The Unverified Rusical didn’t disappoint and proved to be the best Rusical yet.

Right from the start, each queen delivered incredible and high energy performances that left us gagged and wanting more.

Although a couple of queens struggled in regards to their respective parts, as a whole the musical was a success and highlighted the talents of Rosé, Denali, Utica, Tina Burner and Olivia.

The Queens took the trending topics by storm with their epic performance of ‘Social Media: The Unverified Rusical’ 😍 #DragRace

After an incredible episode of dancing, singing and sickening runway lewks, Mother Ru and the judges dwindled the bottom two to Symone and Kandy Muse.

Due to their respective performances in the Rusical, the two queens were forced to lip-sync for their lives.

Taking on Fifth Harmony’s BO$$, Symone and Kandy delivered fierce and passionate energy, laying it all on the line in hopes that RuPaul will keep them safe.

In the end, Symone ended up on top, with Kandy set to go home…or so we thought.

After instructing Miss Muse to sashay away, Mother Ru stopped the Bronx queen at the last minute, stating: “Kandy, Kandy, wait. Stop. I’m not ready for you to go, not yet. You are safe to slay another day.”

Full of tears Kandy thanked RuPaul for the second chance.

“Bitch you didn’t have to play with my emotions,” she said.

Raise you hand if episode eight was a doozy?!