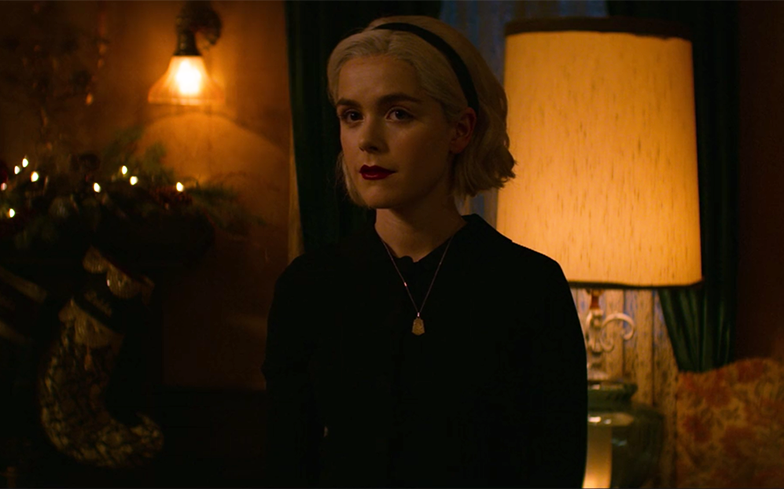 Now that was a Christmas special…

Chilling Adventures of Sabrina: A Midwinter’s Tale premiered on Netflix earlier today and provided us with some more pesty ghouls, Buffy season one-esque beasts and draahmaah, because duh, witches.

The Christmas special follows the events of the critically-acclaimed debut season, which saw the title character outed as a witch to Harvey and her two best friends Roz and Susie, and Zelda becoming a newly-found mother after she kidnapped Father Blackwood’s daughter.

Unlike other fun Christmas specials, this one has one particularly influenced the direction of the show. We’ve compiled a list of five major plot points from the episode that will undoubtedly have an impact on the series’ highly-anticipated second season.

Sabrina and Harvey are over Early on in the episode, Sabrina meets up with her former flame Harvey Kinkle and presents him with a Christmas gift – enchanted pencils. This clearly disturbs Harvey, who hesitantly accepts her present and leaves her to cry on her lonesome. In order to combat his father’s alcoholism, Sabrina later turns up at Harvey’s house and provides him with enchanted eggnog. After the catastrophic events of the episode, which saw Susie kidnapped by a Christmas demon and poltergeists invade the Spellman house, Harvey stops by to thank her for his father’s sobriety, but to inform her that he doesn’t want to be around witchcraft again. He also returns his enchanted pencils, which is quite harsh. Their encounter left on quite a sour note, and her mother later admits to Sabrina that a mortal shouldn’t be involved with witchcraft. So is it over? From the season two trailer, it looks like Sabrina becomes quiiite close with warlock Nicholas Scratch, so we can expect their relationship to advance in the second season.

Sabrina received closure with her mother One of the most prominent mysteries in the first season was the deaths of Sabrina’s mother and father, Edward and Diana Spellman. After Sabrina was forced to sign her name in the Book of the Beast in the finale, Sabrina saw her mother and came to the conclusion that her spirit hasn’t moved on because she has some unfinished business. During A Midwinter’s Tale, Sabrina seeks the help of the Weird Sisters to perform a seance and contact Diana, but is interrupted when the aforementioned pesky ghouls invade the house and her spirit is ousted. However, she returns later on and assists the Spellman’s with a baby problem (just watch), and explains to Sabrina that her previous worries have gone. Her mother then disappears, and it somewhat provides Sabrina with closure. So, will Sabrina be less focused on her parents next season? Obviously, the mystery of their demise will still be there, but it looks like Sabrina will be heading into the second season with a clearer mind.

Ambrose and Luke are as strong as ever

Although their relationship isn’t a main plot point throughout the episode, we do get to see a little bit of Ambrose and Luke – the primary queer romance of the series. Ambrose departs the Spellman house halfway through the episode after the poltergeists’ invasion, and visits Luke for a Christmas party. That’s really it. But in the last scene, the Spellman’s gather for Christmas Eve and Luke is in attendance, and honey, if you invite a boy to your house during Christmas (Winter Solstice, whatever), then it’s pretty damn serious. However, is this a misdirection? During the first season, Aunt Hilda assists (interferes) with their relationship and drugs Luke to help their romance progress. Liquid courage always helps, but at the end of the day, he was still drugged. So, will this be explored? If so, and it should be, we’re not sure if they’ll remain this happy for long… Like we mentioned earlier, Sabrina’s two best friends Roz and Susie discovered her magical ancestry during the last few episodes of the debut season. While they seemed fine with it at the time, the latest episode reveals that they’re not completely on board yet. Before Sabrina approaches the Weird Sisters to assist her with the seance, she asks her two pals if they’d like to take part, which is met with a lot of resistance. Like, c’mon, it’s just a seance? Get a grip. Will they get used to it in the second season? Are we about to see some hardships ahead for the trio?

Madam Satan, aka Mrs Wardell, has been toying with Sabrina ever since the show’s first episode. It all culminated in the finale when (and we’re gonna repeat ourselves now) Sabrina finally gave her soul to the Devil and signed her name in the Book of the Beast. In this episode, Sabrina approaches Madam Satan for advice on how to resurrect her mother’s spirit, but obviously, she fucks it all up by interfering and allowing the poltergeists to enter her home. What has she got in store for Sabrina in the second season? We have a feeling it’s just begun…

The second season of Chilling Adventures of Sabrina will premiere on Netflix will premiere 5 April 2019. Watch the trailer below.