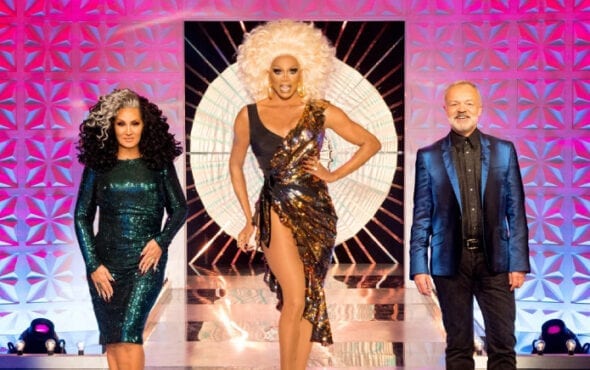 RuPaul’s Drag Race UK viewers have, erm, mixed emotions about the season two semi-final, all because of a… doll.

On this week’s episode, the four remaining contestants – Bimini Bon Boulash, Ellie Diamond, Lawrence Chaney and Tayce – paid homage to one of Britain’s most iconic soap operas as they starred in the new BBC drag drama, BeastEnders.

After displaying their shade in a bitch-fest with puppets, the roles were assigned as follows: Bimini as Skat Slater, the landlady of the Queen Dick; Lawrence as Phyllis Bitchell; Tayce as Karen Bitchell; and Ellie as Thot Bottom, a thirsty take on Dot Cotton.

Before sashaying over to Albert Square, the queens received a masterclass from Sonia Fowler herself, Natalie Cassidy, who tasked them with reciting iconic catchphrases from the long-running series, including “RICKAAAY!” and “Bubbly’s in the fridge…” It was an iconic Drag Race moment, honestly.

After launching their bids for BAFTA nominations in the challenge, which was quintessentially British, the final four stomped the runway as Panto Dames, where this week’s special guest star was revealed to be [insert Eastenders theme here] “Mickay,” a doll version of Danny Dyer’s character. You can’t make this up.

Lawrence and Bimini advanced to the final, with the latter earning her fourth – we repeat, fourth – win of the series, while Ellie and Tayce battled it out in the lip-sync smackdown to the beat of Steps’ dance-pop classic, Last Thing on My Mind. It was about time we got some Steps. Now can we get some S Club 7, Atomic Kitten, Sugababes, Girls Aloud and Spice Girls? We could go on.

RuPaul ultimately awarded the queens with a rare double shantay, meaning all four contestants will go forward to next week’s grand finale and have a shot at winning the crown, sceptre and coveted title of the UK’s Next Drag Superstar.

While the challenge and lip-sync received praise from fans, this week’s special guest, the aforementioned Mickay, was – in the words of Alexis Rose – critically-reviewed. However, viewers continued to praise this season as one of the most iconic in herstory.

Here’s what fans had to say about the semi-final of Drag Race UK season two:

absolutely not The Gays losing it over the most iconic guest judge in drag race herstory for………. that. 😒 pic.twitter.com/pa3MJr9o76

Raging at this weeks guest judge on drag race

Me when I see the most iconic judge in drag race history finally revealed #dragraceuk pic.twitter.com/CIW43n1YWf

the most iconic guest judge in drag race herstory is… a mannequin pic.twitter.com/iVaNLwA37h

Loved all the Drag Race UK season one references in the Beastenders pub! #DragRaceUk

Are u man tellin me Kat slater ain’t the dragrace Uk guest judge????

Genuinely, that acting challenge was the first time in drag race history that I actually laughed and enjoyed it. So so so good! @dragraceukbbc, never end please #DragRaceUK while I’m team Bimini – I love them all.

I’m so mad. Of all the things Covid has stopped, stopping me from experiencing Danny Dyer on drag race is up there with one of the worst

@its_tayce is officially the #1 lip sync assassin of drag race. FOUR lip syncs and still made it to the finale. I’m living. 😍😍😍

On next week’s finale, the queens will compete in an all-singing, all-dancing extravaganza for the crown. Choreographer Jay Revell will coach the contestants in their last maxi-challenge, while Michelle Visage, Alan Carr, Graham Norton and all of the eliminated queens will ruturn to witness RuPaul crown a brand new queen.