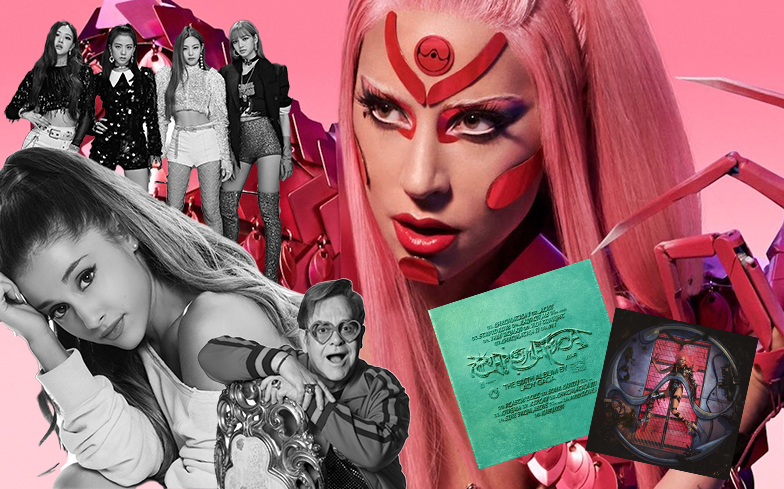 After a jazz album, the country-inspired Joanne, and the rock-leaning A Star Is Born soundtrack, Gaga decided to (finally) give the gays everything they ever wanted with a return to floor-filling pop anthems on her sixth studio album Chromatica.

With a club-ready lead single Stupid Love, and the promise of big collaborations with the likes of Ariana Grande and K-pop girl group BLACKPINK, expectations are sky high – and we have a good feeling Gaga’s going to deliver.

We’re more than ready for another album of Gaga bangers. Here’s everything we know so far.

When is it out?

Chromatica was originally scheduled for release on 10 April, but Gaga announced that she would be pushing the album back to focus on raising money to help the fight against the global coronavirus pandemic. Fans were disappointed of course, but in fairness she did raise over $35 million and host a star-studded live-stream benefit concert, so we think it was worth it.

Thankfully, Gaga has now announced that Chromatica will drop on Friday 29 May, seven weeks after it’s original release date. The wait wasn’t as bad as many had anticipated.

Which artists will feature on the album?

After months of rumours and teasing from both artists, Gaga finally confirmed that she’ll be teaming up with Ariana Grande for a superstar duet, the likes of which we haven’t seen since she joined forces with Beyonce for her 2010 hit Telephone. It’s a massive dance-floor anthem called Rain On Me, and features the lyrics, “It’s coming down on me, water like misery.” Speaking of the collaboration, Gaga previously said: “I sat with her and we talked about our lives. It’s two women having a conversation about how to keep going and how to be grateful for what you do.”

That’s not the only A-list collaboration we can expect from Chromatica though, as Gaga is also teaming up with her longtime friend Elton John for a song called Sine From Above. The two have performed together on multiple occasions and even recorded a song for the Gnomeo & Juliet movie soundtrack back in 2011, but this is the first time they’ve appeared together on one of their studio albums. We’re expecting a soaring piano ballad – but who knows what we’ll get when it comes to Gaga?

Rounding off the list of collaborators are K-pop superstars BLACKPINK, the biggest girl group in the world right now, who will appear on a track called Sour Candy. They’re known for their glossy pop bangers and over-the-top visuals – check out Kill This Love if you’re not already a fan – and they have a super-passionate fanbase. We’re keeping our fingers crossed we get a music video for this one.

What producers and songwriters is Gaga working with?

Hitmaker BloodPop, who worked extensively with Gaga on her last studio album Joanne, recently shared the tracklist for Chromatica on Instagram and revealed a whole host of big-name producers and songwriters that have had a hand in creating the album.

Gaga also recently addressed working with hitmaker Max Martin for the first time, joking: “I’ve never worked with him, I’ve always gone, ‘I write my own music, I don’t need to work with Max’, but I decided to stop being an asshole and meet him.”

It was previously teased that Gaga had worked with acclaimed producer (and regular Charli XCX collaborator) SOPHIE, but we haven’t had confirmation that her work has made the cut yet. Maybe on a bonus track?

The disco-inspired club-banger Stupid Love was released as the album’s lead single back in February, shortly before the coronavirus pandemic put the world into lockdown and led to the delay of Chromatica.

Set in an outer space wasteland, the video sees Gaga serve futuristic Power-Ranger-meets-Avatar-meets-Grimes-meets-intergalactic-punk lewks as she fights for love and peace among warring Mad Max-style tribes.

Nothing’s confirmed yet, but we’d expect Ariana Grande collaboration Rain On Me to serve as the album’s second official single – it would be a real missed opportunity if not.

How many songs are on the album?

There will be 16 songs on the standard version of Chromatica, while Target unveiled the details of three exclusive bonus tracks, meaning there’s a total of 19 songs on the deluxe version of the record. See the tracklist below.