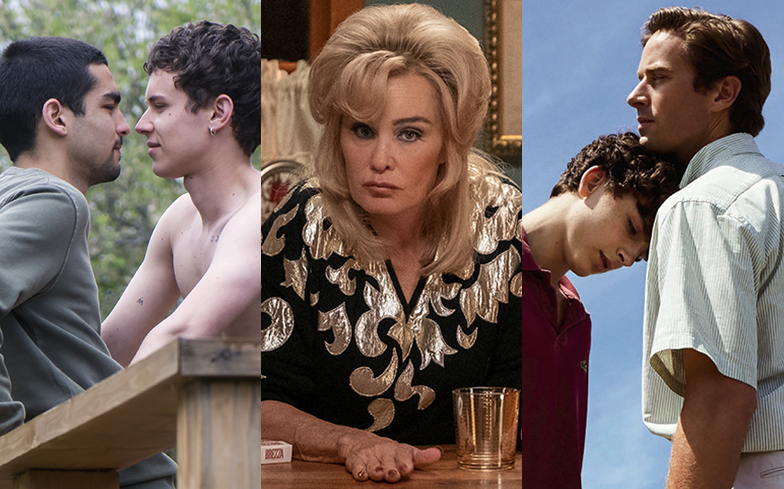 Netflix has more queer goodness coming your way this month.

And there’s more to come, as September sees a number of LGBTQ favourites make their return alongside a major gay movie and a brand new show which we’re sure is already on your radar [Here’s a clue: there’s talk of “munching butts” involved].

Find out what’s good, queer and coming to Netflix UK through September below.

Netflix had a surprise hit on their hands when Spanish teen drama Elite premiered in October last year, following the culture clash as three working-class teens enrol in an exclusive private school full of wealthy students. The first season of the show received universal acclaim from critics, and was also commended for its portrayal of LGBTQ characters including the relationship between Omar and Ander. Netflix later revealed the series had been streamed by over 20 million viewers in its first month of release alone. So fans were ecstatic when it was revealed earlier this month that the hit show would be coming back for a second season on 6 September, bringing more melodrama and intense staring along with it – not to mention the fallout from that murder-mystery shocker.

Throughout its eight season run, anthology series American Horror Story has slowly warmed to the idea of cross-season referencing – something creator Ryan Murphy once said would never happen – and that concept went full bloom in Apocalypse. It’s the most ambitious story the show has ever delivered, bringing back iconic characters from both Murder House and Coven, two of American Horror Story’s most beloved seasons, while introducing new additions like Cody Fern’s bisexual anti-christ Michael Langdon and Evan Peters’ gay hairdresser Mr Gallant, who has a deadly rendezvous with Rubber Man (who OG fans will remember from the show’s very first season) as the world literally comes to an end. It’s an overwhelming, terrifying and utterly ridiculous viewing experience from start to finish – which is exactly what we want from American Horror Story. You don’t need to watch Murder House and Coven before partaking, but it certainly helps when it comes to those gag-worthy moments – in particular the highly-anticipated return of Jessica Lange.

Thursday 26 September: Call Me By Your Name

In just a couple of years, Call Me By Your Name has become one of the most beloved gay films of all time. For all the criticism it’s faced – whether it’s the age gap, or the fact that it’s set in the 1980s and doesn’t address the AIDS crisis – the themes of first love, heartbreak, and the intense emotions queer young adults feel when becoming who they’re meant to be are relatable for everyone. And that final scene, as the credits roll, will leave you a wreck. It also kick-started Timotheé Chalamet’s already-illustrious career, and helped reprogram Armie Hammer from Hollywood leading man to indie film star, earning him multiple award nominations including Best Supporting Actor at the Academy Awards and Golden Globes.

Fans of The Good Place were devastated to hear that the comedy-drama’s upcoming fourth season will be its last. It feels like we’ve only just gotten to know Eleanor, Chidi, Jason and Tahani (who could forget her iconic 582 Questions with International Sophisticate Magazine video?), and their journey through the afterlife is already coming to an end. The good news, though, is that we’ve still got another 14 episodes to enjoy with an hour-long finale wrapping everything up – and there’s definitely something to be said about going out on a high. William Jackson Harper, who plays Chidi on the show, confirmed last year that Eleanor is “super bisexual”. Her character has begun to explore that over three seasons, admitting to being attracted to Tahani and even trying to kiss Chidi’s girlfriend when she was supposed to be helping them break up, so we’re keeping our fingers crossed this is explored more in the final season.

Friday 27 September: The Politician (season one)

The Politician will be your new favourite show. Trust us, it’s great. The series stars Ben Platt as Payton Hobart, a wealthy student from California who is determined to become the President of the United States – but first, he must become student body president at Saint Sebastian High School. The Tony Award-winner is joined by Gwyneth Paltrow, Jessica Lange, Zoey Deutch, Lucy Boynton, Bob Balaban, David Corenswet, Julia Schlaepfer, Laura Dreyfuss, Theo Germaine, Rahne Jones, Benjamin Barrett, Judith Light and Bette Midler – and if that cast doesn’t get you excited, why are you even reading this article? The show is incredibly queer (and very self-aware of the fact), featuring characters from pretty much every part of the LGBTQ community – which is no surprise when you consider TV mastermind Ryan Murphy (Glee, American Horror Story, Pose) is behind it. Most importantly, the show sees Jessica Lange utter the already-iconic line: “That’s what gays do, munch butts and celebrate Halloween.”