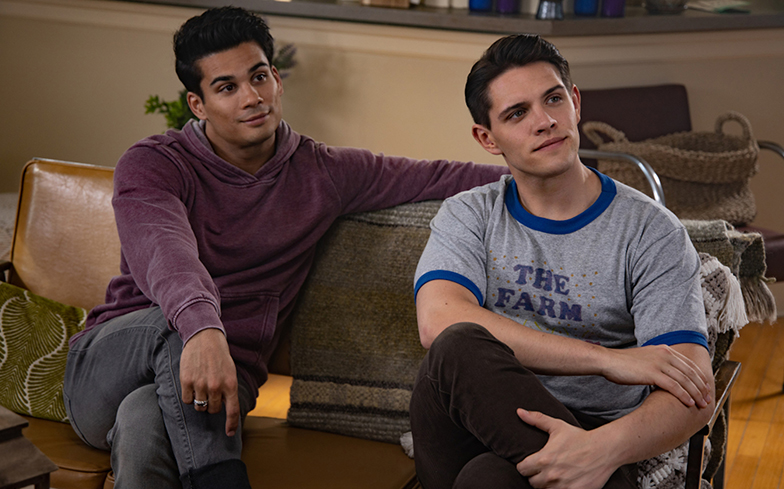 And there’s more to come, as January sees the return of a number of queer favourites including season two of Sex Education and season six of Grace and Frankie, as well as the debut of RuPaul’s new comedy series AJ and the Queen.

Find out what’s good, queer and coming to Netflix UK through January below.

Friday 10 January: AJ and the Queen

RuPaul’s new Netflix series AJ and the Queen will star the Drag Race host as Ruby Red, a “bigger-than-life but down-on-her-luck drag queen” who travels across America in a rundown RV from the 90s, accompanied by a wise-cracking 11-year-old orphan called AJ. Each episode, RuPaul will visit a drag club and perform a “killer musical number” – and she’ll be joined by a whopping 22 legendary Drag Race stars including Valentina, Mayhem Miller, Bianca Del Rio, Ginger Minj, Manila Luzon, Latrice Royale, Jinkx Monsoon and Katya. The multiple Emmy Award-winner wrote and executive produced the show alongside Michael Patrick King, who is best known for directing, writing and producing the iconic HBO comedy, Sex and the City, as well as its two spin-off feature films, so we’re expecting big things from this show.

Fans of The Good Place were devastated to hear that the comedy-drama’s upcoming fourth season will be its last. It feels like we’ve only just gotten to know Eleanor, Chidi, Jason and Tahani (who could forget her iconic 582 Questions with International Sophisticate Magazine video?), and their journey through the afterlife is already coming to an end. We’ve still got another five episodes to enjoy when the show returns from its mid-season break this month though – and there’s definitely something to be said about going out on a high. William Jackson Harper, who plays Chidi on the show, confirmed last year that Eleanor is “super bisexual”. Her character has begun to explore that over three seasons, admitting to being attracted to Tahani and even trying to kiss Chidi’s girlfriend when she was supposed to be helping them break up, so we’re keeping our fingers crossed this is explored more in the final few episodes.

Hit comedy-drama Grace and Frankie, which stars Emmy Award-winning actresses Jane Fonda and Lily Tomlin as two women who become unlikely friends when their husbands announce they’re in love with each other, is back for a sixth season this month. A trailer has teased a health scare for Sol (Sam Waterson) while Grace adjusts to married life with Nick (Peter Gallagher) after their spontaneous nuptials in the season five finale. There is some bad news for fans, as it was recently announced that the following seventh season will be the last outing for the iconic pair, but at least we’ve still got two whole seasons to enjoy before that moment comes.

Coming-of-age dramedy Sex Education – which follows a sexually awkward teenager living with his sex therapist mother – garnered over 40 million viewers in its first week of release, becoming one of the streaming service’s most successful shows ever. It received universal acclaim, especially due to its diverse representation of the LGBTQ community. So naturally, anticipation is high for its return. In the second season, Otis Milburn (Asa Butterfield) will attempt to control his newly-discovered sexual urges in order to “progress” with his new girlfriend Ola (Patricia Allison). He will also try and build bridges with Maeve (Emma Mackey). Moordale Secondary will be at the forefront of a Chlamydia outbreak, Eric (Ncuti Gatwa) will explore his new-found confidence, Lily (Tanya Reynolds) focuses on her creative talents instead of sexual endeavours, while Maeve and Aimee’s (Aimee Lou Wood) relationship is at its strongest after the latter’s departure from The Untouchables.

American drama Riverdale may be one of the most ridiculous shows to hit our screens in recent memory, but it’s garnered a passionate following over three seasons thanks to its attractive cast, copious amounts of drama, and its representation of gay, lesbian and bisexual characters. Fans will be glad to know that season four will return from its mid-season winter break later this month.

Less than a year after the second instalment, which received universal critical acclaim for its dark tone and treatment of its LGBTQ characters, The Chilling Adventures of Sabrina is returning for part three. Showrunner Roberto Aguirre-Sacasa recently shared a behind-the-scenes photo from the set of the upcoming season of a mysterious woman in a black cloak alongside the caption: “The dread banshee has arrived, but which Spellman will die?” The banshee comes from Irish mythology, and is a female spirit who heralds the death of a family member by screaming her lungs out. But a dread banshee? Who knows? There’s four major Spellman’s in the series: Sabrina, Hilda, Zelda and pansexual warlock Ambrose – is the show seriously about to chop one of them off? Obviously, it won’t be Sabrina, so it looks like it will be one of her aunts or her cousin…

It was recently crowned the best TV show of the 2010s by Vanity Fair, but despite receiving universal praise – particularly for its depiction of mental health, sexuality, addiction, sexism, racism and trauma – Netflix sadly revealed last year that Bojack Horseman had been cancelled, and its sixth season would be its last. The second half of its final season premieres on the streaming service at the end of January, with eight new episodes to wrap things up. In case you’re wondering why we’ve included it on our list, character Todd Chavez (voiced by Aaron Paul) came out as asexual on the show’s third season finale – making him the only asexual character to appear on a current TV series across primetime, cable and streaming platforms, according to GLAAD. The show’s handling of the subject matter has received praise from viewers and critics.