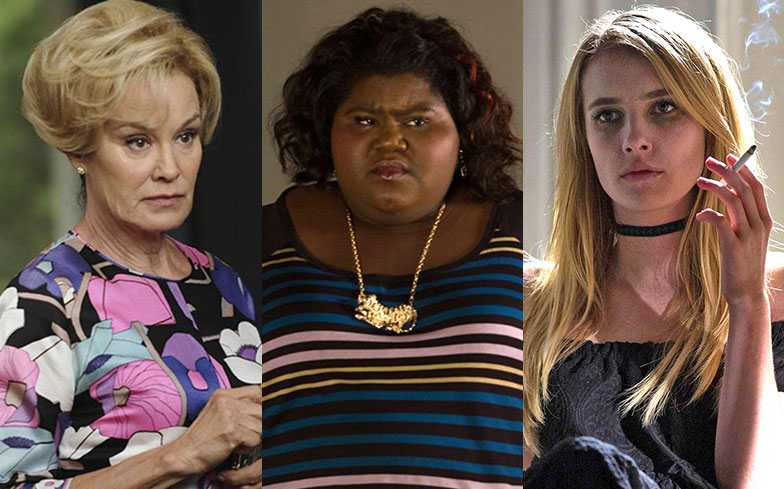 American Horror Story: Apocalypse will have the biggest cast in the show’s history.

For the upcoming eighth season of the hit anthology TV series, some of the most beloved actors – and the characters they’ve played – are making a comeback, and it’s beginning to look like one big family reunion.

Ahead of its premiere on Wednesday 12 September, we’ve rounded up all the familiar faces you’ll see on your screens. We don’t have a name for Evan’s new character yet, but we do know that he’ll be playing a “comedic part” this season, and that his character will be a hair stylist who’s grandmother is played by Joan Collins. It’ll certainly make for a more light-hearted change from his role in last year’s season Cult, which saw him play a Trump-supporting cult leader who wanted to watch the world burn. Evan will also be reprising his season one (Murder House) role of Tate Langdon, father of anti-christ baby Michael. Completing the trio of lead stars this season is legendary Misery actress Kathy Bates. She terrified viewers as Delphine LaLaurie in Coven and The Butcher/Agnes Mary Winstead in Roanoke, so we’re curious to see what kind of character she’ll play when she takes on newbie Ms. Meade for Apocalypse. Much like Sarah Paulson, Taissa will be playing more than one character this season. She’ll reprise her Murder House role of Violet Harmon, as well as her Coven character Zoe Benson. We’re curious to see how the show will differentiate between the two, as they’re visually very similar.

The OG witch bitch from Coven, Madison Montgomery, will be making a comeback for Apocalypse when Emma Roberts takes on the role once again. Not much is known about the role she’ll play in the end of the world, but given her villainous streak, we wouldn’t be surprised if she’s contributing to the destruction rather than joining the resistance. She may have met her end during season five (Hotel), but that isn’t stopping show creator Ryan Murphy bringing Queenie back. She was one of the most interesting – and relatable – characters in season three (Coven), and we’ve missed actress Gabourey Sidibe on our screens of late, so we’re glad she’s making her American Horror Story comeback. Award-winning actress Frances Conroy has appeared in all but one season of American Horror Story, so fans were ecstatic to hear that she’d be returning once again for Apocalypse. This time, she’ll be reprising her season three (Coven) role of Myrtle Snow. Like many Coven characters, she’s currently deceased, so it’ll be interesting to see how – or why – her character returns. Swamp witch-turned-bad ass bitch Misty Day is another season three (Coven) favourite who ended up deceased by the end of the season. We last saw her in an endless loop of her own personal hell – dissecting a live frog in school – so we’ll gladly see her make a return to the land of the living in Apocalypse. As well as the majority of the Coven cast returning (we’re still keeping our fingers crossed for Jamie Brewer and Angela Bassett), legendary Fleetwood Mac singer Stevie Nicks will also be returning to play… Stevie Nicks. We last saw her singing the band’s song Seven Wonders as the coven witches attempted to perform the seven wonders to become the next supreme. Here’s hoping there’s more musical numbers to come. Fans have been keeping their fingers crossed for a return from fan favourite Jessica Lange ever since her final appearance in season four (Freak Show) of the series. Thankfully, our prayers have been answered, as creator Ryan Murphy has managed to convince her to reprise her role of Constance Langdon in an episode directed by Sarah Paulson. We last saw Constance looking after anti-christ baby Michael in season one (Murder House), so we have a feeling she’ll have an important part to play in the end of the world. Fans hoping for some more eye candy this season will be glad to know that A-grade DILF and season one lead Dylan McDermott will be returning to play his season one (Murder House) character Ben Harmon. His strained relationship with wife Vivien (Connie Britton) was an integral part in the first season, so we’re expecting more drama to come. Hopefully we don’t have to endure any more scenes of him cry-wanking. Thankfully, Nashville favourite Connie Britton will also be along for the ride, as she too will return to the Murder House when she plays Vivien Harmon alongside her unfaithful on-screen husband Ben Harmon, played by Dylan McDermott. Adina Porter has come a long way from playing the ‘boring patient’ in season one (Murder House) of the show, having taken on heavier, juicier roles in the past two seasons: Former policewoman Lee Harris in Roanoke, and reporter Beverly Hope in Cult. Nothing is known of her Apocalypse character, other than her name – Dina Stevens. After playing Meadow Wilton in Cult, Leslie Grossman is back with a new character with a ridiculous name. We don’t know anything about Coco yet, but she has been seen filming with Billie Lourd, so it’s likely their characters are either friends or related. We don’t know much about Billie’s character yet, but we do know she’ll be called Mallory. As previously mentioned, she’s been spotted filming with Leslie Grossman on set, so the two characters are likely interconnected in some way. Actor and comedian Billy Eichner made his American Horror Story debut in season seven (Cult), where he played a gun-obsessed beekeeper who married his high school best friend Meadow, despite being gay. There’s no word on his Apocalypse character yet. Singer-songwriter and Broadway star Cheyenne Jackson first appeared in American Horror Story as fashion designer Will Drake in Hotel, and has gone on to become a regular in the show. As well as the many returning stars, there will also be a few new faces in Apocalypse…

When the season 8 theme of Apocalypse was announced, fans quickly began to speculate that anti-christ baby Michael Langdon would have a role to play in the end of the world. We last saw him as a child at the end of season one (Murder House) where he killed his babysitter. Now, he’s all grown up, and he’s being played by Cody Fern, who previously starred in one of Ryan Murphy’s other hit shows, American Crime Story. Legendary actress Dame Joan Collins, who’ll be making her American Horror Story debut in the upcoming season, will play the “glamorous” grandmother to Evan Peters’ character. Her character doesn’t have a name yet. UnREAL star and Drag Race guest judge Jeffrey Bowyer-Chapman is joining the cast of American Horror Story. No details of his character have been unveiled.

Another new addition to the cast is Kyle Allen. Once again, no details are available as of yet. Fresh off his already-iconic appearance on ballroom drama Pose, Billy Porter is joining the American Horror Story family. No details of his character have been announced yet.