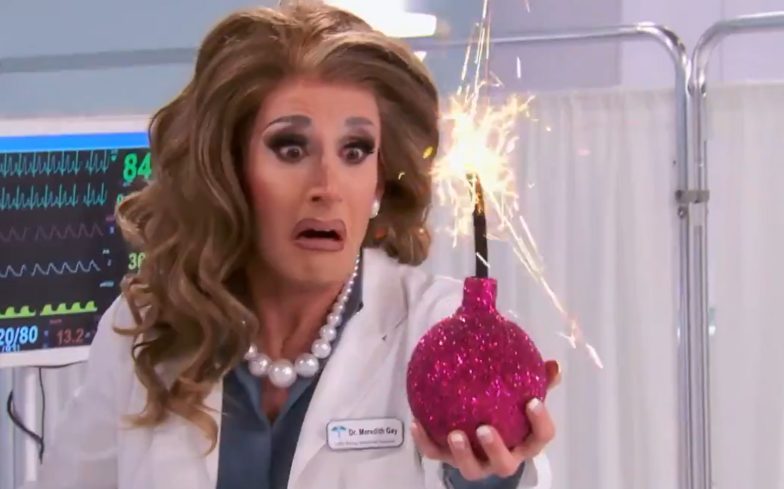 The queens were acting in long-running series, Gay’s Anatomy.

Fans were up in arms last week on Drag Race, after fan favourite Rock M. Sakura was eliminated after lip-synching against New York queen, Brita.

In what might be one of the best-acted challenges in Drag Race HERstory, several queens were in contention for the win, which ultimately went to Sherry Pie. Meanwhile Heidi N Closet and Nicky Doll were deemed the weakest two queens and lip-synched to Kim Petras’s hit song Heart to Break.

And fans weren’t happy with this result, with one fan writing: “nicky got eliminated, sherry won and aiden is still here” with the Untucked clip of Detox and Roxxxy agreeing that they’d had it.

Elsewhere, the episode saw the triumphant return of Dahlia Sin as the Fierce Brocally, RuPaul freaking out over Crystal Methyd’s mullet and Heidi N Closet having to rescue her wig during the lip sync.

Fans also noted the bad blood between Brita and Aiden Zhane, with the former constantly coming for the latter, and from next week’s preview it looks like that’s set to continue. Fans were split on the matter, with some backing Brita saying that Aiden had a ‘don’t care’ attitude, with others labelling Brita a bully.

One wrote: “Ok it would be kinda funny tho if Aiden beat Brita in a lip sync.”

Another posted a Reddit comment which read: “Brita has been picking on Aiden since episode 3 because she needs someone to take out the fact that she came into the competition expecting to be the next Bianca Del Rio and she’s barely the next Ariel Versace.”

“i cannot believe aiden keeps skating by y’all,” wrote a third. “she wore the same damn outfit from you don’t know me but with a cape and a bug in her mouth. the judging this season.”

And another was not happy with Aiden’s similar looks: “aiden zhane wore this pussycat wig….. AGAIN!?”

Next week, it’s the much-awaited for Snatch Game, and the episode will feature the return of the iconic, legendary, hilarious, etc. Vanessa Vanjie Mateo.

All five episodes of RuPaul’s Drag Reason Season 12 are available to stream on Netflix.

Related: Michelle Visage wants to host her own Drag Race “with bio queens and trans women”