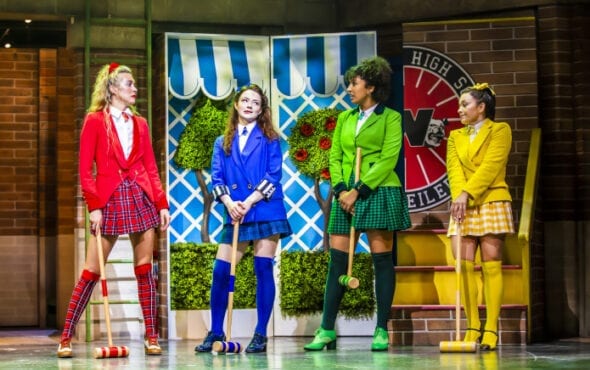 The hit West End show, based on the cult classic 1989 film, has returned post-pandemic to the Theatre Royal Haymarket, directed by Andy Fickman.

In an almost entirely recast return, Heathers the Musical has reopened on London’s West End to delight audiences once more. For those unfamiliar with the plot, it’s quite a departure from the twee All-American High School schmaltzy affair that the advertising may have you believe – without wanting to give away spoilers, it’s a delightfully subversive tale. It follows a pair of outsiders seeking to overthrow the existing order of their high school, which sees three young women – the titular Heathers – reign supreme over their fellow students. It’s full of surprising and often rather shocking twists and turns.

What really makes this show is the sheer quality of the performances. Jodie Steele is the only returning member of the principal cast and she’s superb as Heather Chandler – a real powerhouse vocalist, she’s also hilariously funny, with impeccable comic timing. A scene where classmates perform a tribute song about her, while she reacts in the background to their various platitudes, is full of entertaining physical comedy moments and is a total delight to watch.

Hers is not the only standout performance, though – we were impressed with Christina Bennington as Veronica Sawyer, who again possesses a remarkable singing voice and delivers a surprisingly nuanced character, pretending she doesn’t want to be part of the gang but clearly secretly does. Her subtle, seemingly involuntary, moments of choreography are a superb little detail. Jordan Luke Gage impresses as the James Dean-esque JD, while Madison Swan is excellent as forgotten friend Martha Dunnstock – another excellent vocalist, she steals the second act with a show-stopping rendition of Kindergarten Boyfriend.

On to the songs themselves and while they are generally very good, we felt that there may be a handful too many. The show is over two and a half hours in length with very little dialogue – we certainly wouldn’t have minded a couple of songs being dropped. That said, it never feels like it drags, and there are again numerous highlights. Candy Store is a camp comedy bop, while Seventeen is a gorgeous ballad. Stylistically it’s full of references to late-80s rock anthems and power ballads; we noted musical nods to Bon Jovi, Roxette and a whole host more besides.

We had a lot of fun with Heathers the Musical – it’s an entertaining show and the quality of the talent on stage justifies the admission price alone. We’ll overlook a couple of its shortcomings – namely that it’s not the smartest or most substantial show in town, and that the set is, if we’re being kind, simple but effective – because we’re fans of musicals that unabashedly know what they are and play up to it. It’s camp, silly, basic, crude and borderline absurd – but above all that, it delivers a rollicking good time.