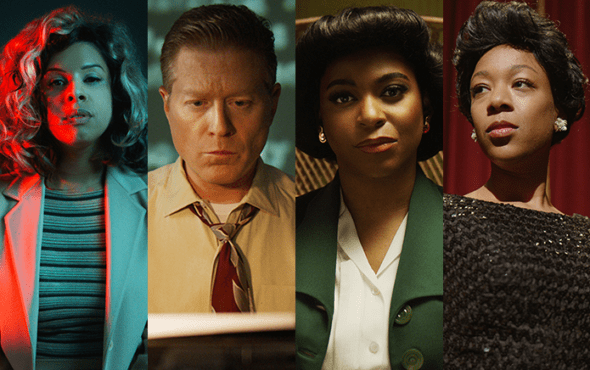 HBO Max has unveiled the cast for Equal, the streaming service’s upcoming four-part docuseries about the history of the LGBTQ+ rights movement.

Anthony Rapp, Cheyenne Jackson, Hailie Sahar, Isis King, Jamie Clayton, Keiynan Lonsdale, Samira Wiley, Sara Gilbert and Shannon Purser are among the cast members who will portray queer pioneers, activists and political figures from the turn of the century to the 1970s.

The first episode will chronicle the rise of The Mattachine Society and the Daughters of Bilitis, two of the earliest LGBTQ+ organisations on record, while the second will explore the 1966 Compton’s Cafeteria Riots, which marked the beginning of transgender activism in San Francisco.

Part three examines the contributions from the Black community of the LGBTQ+ civil rights movement, and the fourth and final episode will delve into the Stonewall Uprising – the event that led to the gay liberation movement and the modern fight for LGBTQ+ rights in the United States.

“Equal honors the rebels of yesteryear with never-before-seen archival footage along with stylistic depictions that bring to life the gripping and true backstories of these leaders and unsung heroes,” HBO Max said in a press release.

“Viewers will meet a wide range of LGBTQ+ visionaries portrayed by the cast, many of whom identify as members of the LGBTQ+ community.”

Stephen Kijak (Queer Eye) acts as showrunner and director for episodes one, three and four, with the second being directed by Kimberley Reed, who’s previously earned acclaim with documentaries Prodigal Songs and Dark Money.

Check out the full cast with character descriptions (courtesy of HBO Max) below. Dale was a gay rights activist, playwright and author. He was one of the founding members of the Mattachine Society in the early 1950s, one of the earliest gay rights groups in the United States. Following his entrapment and arrest on sex charges, Jennings fought the charges in a successful court cast which became a landmark moment for the movement. He was also one of the founders of One Magazine, the first pro-gay publication in the U.S. Harry was the founder of The Mattachine Society. His manifesto, “The Call,” written feverishly one night in 1948 called for the protection and improvement of the rights of homosexuals and was the foundation on which the group was built. Del & Phyllis were a lesbian couple (together for 56 years until Martin’s death in 2008) who founded the Daughters of Bilitis in San Francisco in 1955, the first social and political organization for lesbians in the United States. They also published The Ladder, the first nationally distributed lesbian publication in the US. Active in both gay and feminist politics their whole lives, they were the first same-sex couple to legally wed. Sara Gilbert as J.M. From Cleveland.

“JM” is an “anonymous reader” of The Ladder, representing the isolated lesbians of the 1950’s who found a lifeline in the pages of the magazine, but who were forced to live closeted lives for fear of losing jobs, friends and family. Anne Ramsay as The FBI Agent.

A composite character, the FBI kept active files on the Mattachine Society and the Daughters of Bilitis – gay groups were often linked to communism and considered to be dangerous subversives. Socialite, chef, and prohibition-era entrepreneur – and one of the first documented Black transgender persons in the USA — Lucy Hicks Anderson was one of the most prominent citizens of Oxnard, CA until 1945 when a syphilis outbreak at her brothel became her undoing, outing her to the community. Jack is a little-known character in the history of folks who probably would have self-identified as trans. He was a prominent local outcast at the turn of the century in Montana, in and out of jail and in and out of the local headlines for refusing to wear clothes that conformed to the gender assigned to Jack at birth. A Jack-of-all-trades and teller of tall tales, Jack Starr (aka Jacques Moret) is an enigmatic early figure who pushed the boundaries of gender expression. Widely known as the world’s first transgender celebrity, Christine became an internationally known figure following the publicity surrounding her gender confirmation surgery in the early 1950’s. She became a popular nightclub entertainer, author, and lecturer and used her celebrity to advance the cause of transgender rights. “Alexis” is a composite character, the spirit of the Compton’s Cafeteria Riot in 1966, one of the first known instances of trans and queer folk rising up against police harassment – three years before the Stonewall Riots. Author of the landmark play “A Raisin in the Sun,” Lorraine Hansberry was the first African American female author to have a play performed on Broadway. She was a radical and forceful voice within the Civil Rights Movement, who died far too young at age 34 of pancreatic cancer. While closeted during her lifetime, she wrote extensively under a variety of pseudonyms – in plays, stories and letters that discussed her lesbianism and the oppression of homosexuals in society. Bayard was an American leader in social movements for civil rights, socialism, nonviolence, and gay rights. He was a close mentor and advisor to Dr. Martin Luther King Jr. and one of the chief architects of the March on Washington. Because of a 1953 arrest on sex charges his sexuality was often weaponized against him and the movement, but he remained a tireless advocate for social justice his entire life – and was posthumously awarded the Presidential Medal of Freedom by President Barak Obama in 2013. In 1961 José became the first openly gay candidate for public office in the United States, running for a seat on the SF Board of Supervisors 16 years before Harvey Milk. He is also remembered as a beloved and inspiring drag performer at SF’s Black Cat Bar, who raised the spirits and political consciousness of the bar’s gay male patrons with his rousing anthem “God Save Us Nelly Queens”! A lifelong advocate and activist, José founded the Imperial Court System, one of the oldest and largest LGBT organizations in the world. Sylvia was a Latina American gay liberation and transgender rights activist. Prominent as an activist and community worker in New York, Rivera, along with close friend Marsha P. Johnson, co-founded the Street Transvestite Action Revolutionaries in 1970, a group dedicated to helping homeless young drag queens, gay youth, and trans women. Whether true or a bit of self myth-making, Sylvia placed herself at the center of the Stonewall Riots – either way, her perspective on the riots and its aftermath are an indelible part of the oral history of Stonewall. Craig was an American gay rights activist known for founding the Oscar Wilde Memorial Bookshop in 1967, the first bookstore devoted to gay and lesbian authors. A witness and participant in the Stonewall riots, he was one of the prime movers in the creation of the first New York City Pride demonstration. Mark is an American journalist and prominent gay rights activist. He participated in the Stonewall riots and was one of the original founders of the Gay Liberation Front where he created its Gay Youth program. Stormé was a gay civil rights icon and entertainer whose scuffle with police was, according to many eyewitnesses, the spark that ignited the Stonewall riots, spurring the crowd to action. She worked for much of her life as an MC, singer, bouncer, bodyguard and volunteer street patrol worker, the “guardian of lesbians in the Village.” Howard was an Oscar-winning film director, producer, journalist, screenwriter, actor and radio broadcaster. At the peak of the historic Stonewall Riots in New York City in 1969, he managed to get inside the now famous bar with his Village Voice reporter’s police credentials. He was the only journalist who reported about the siege from that dangerous vantage point. Dick was a prominent LGBTQ rights activist and president of the Mattachine Society in the 1960s. He is also known for being the first gay reporter to publish an account of the Stonewall Riots, which appeared in a special edition of the Mattachine Newsletter the day after he witnessed the first night of the riot.