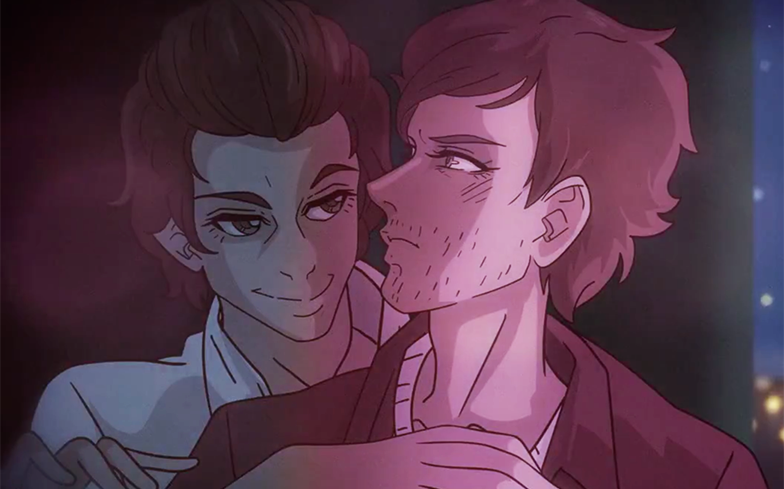 The HBO drama – which is based on the Israeli mini-series of the same name – follows a group of high school students as they attempt to navigate life with drugs, sex, identity, love and friendship in the social media age.

The series has only released three episodes so far, but it’s received acclaim from critics for the cast’s performances, storytelling, visuals and approach to dark subjects such as sex, sexuality and addiction.

In the latest episode, titled Made You Look, Zendaya’s character Kat introduces audiences to Rue (Ferreira) a former internet star who became a viral sensation after producing sexual fan-fiction of Harry Styles and Louis Tomlinson.

During the opening scene, Kat says Rue is to blame for the “Larry Stylinson conspiracy theory, that Harry Styles and Louis Tomlinson of One Direction are secretly fucking.”

Several fans were quick to upload the scene on Twitter – watch below.

For years, One Direction fans have ‘shipped’ Harry and Louis as a couple, and some have even uploaded videos on YouTube with ‘evidence’ to prove the two stars were having a secret relationship.

Despite this, Larry Stylinson (the name fans gave them, like Brangelina etc) shippers slammed Euphoria for airing the scene because it’s “disgusting and disrespectful” to Harry and Louis, with some even campaigning for the episode to be taken off HBO.

“FUCK euphoria,” said one fan. “That’s so disrespectful to both Harry & Louis. To know that this is going to blow up & they probably did it just to get their viewers up is 100x worse.”

Another wrote: “I am COMPLETELY AGAINST THIS. it doesn’t matter your views on Larry, whatever their relationship is, THIS IS DISRESPECTFUL TO THEM.”

I’m? So? Confused? Who allowed Euphoria to use Harry & Louis’ names? Are lou & harry aware that this happened? Like they must be-it’s hbo so they probably had to like have some form of permission from lou & harry’s management or them themselves but why would anyone allow that?

just saw the euphoria scene of harry & louis & i’m so disgusted. louis clearly said that the ship ruined their friendship & some prick decided to air that on tv with their real names for everyone to see… if we’re this uncomfortable i can’t imagine how they’re feeling

they really put harrylouis fanfic in euphoria what is this

FUCK euphoria. That’s so disrespectful to both Harry & Louis. To know that this is going to blow up & they probably did it just to get their viewers up is 100x worse.

why did euphoria have to pick larry tho?? of all the ships?? why couldn’t they do johnlock- ANY OTHER FICTIONAL PAIRING?? WHY WHY WHY DID IT HAVE TO BE REAL PEOPLE WHO HAVE FEELINGS AND DESERVE RESPECT?? they saw the backlash of After and they changed the names?? shits disgusting pic.twitter.com/sWmkzxdxKS

still can't get over the fact that they had rue narrate a whole ass larry fanfiction in this show zendaya sweetie i'm so sorry those words had to come out of your mouth #Euphoria pic.twitter.com/pqzKOqBclZ

Omfg Larry stans are PISSED about the Euphoria Larry scene… Like they didn't do the same bullshit for YEARS and ruin their irl friendship LMAOOOOO #EUPHORIA pic.twitter.com/J3VkFHSrWL

I literally just saw a tweet that said this whole euphoria episode mess is larries fault— sorry but I don’t remember asking for this at all. In fact I am COMPLETLEY AGAINST THIS. it doesn’t matter your views on Larry, whatever their relationship is, THIS IS DISRESPECTFUL TO THEM

as a larrie, i do not aprove of there being a supposed larry sex scene in euphoria

go ahead and act like larries caused this i dont care. most of us don’t want this.

OH MY GOD LARRY STYLINSON IS IN THIS EPISODE OF EUPHORIA WHAT IS GOING ON THE SIMULATION IS GLITCHING THERE A LITTLE ANIMATION IM pic.twitter.com/gAeWrRX2DO

the euphoria writers room coming up with that fake larry stylinson fanfiction: pic.twitter.com/JNkr28klMq