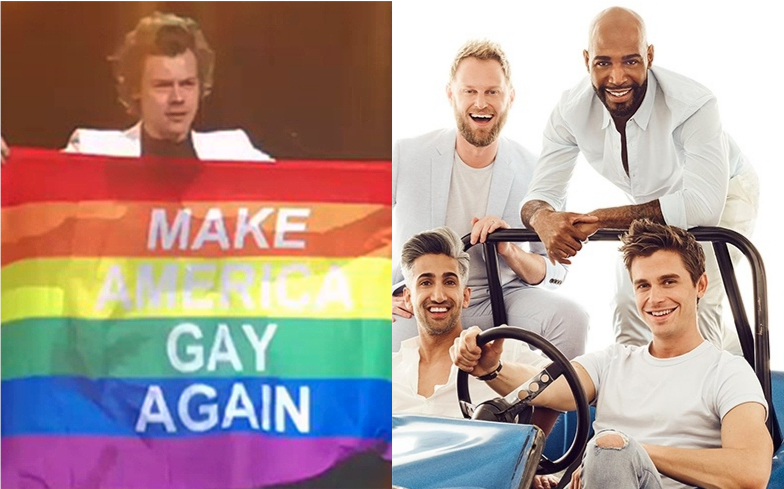 The Fab 5 are in Tokyo filming a mini-series which will air before the highly anticipated third season of Queer Eye.

The Queer Eye guys are currently out filming in Tokyo for a mini-series, but they happened to bump into another famous face while they were out there.

Bobby Berk, interior design, uploaded a video to his Instagram story which saw him and Karamo hanging out with proud LGBTQ ally Harry Styles.

During some of the clips uploaded, Harry and Bobby can be seen singing to the Queen hit Bohemian Rhapsody, as well as the Whitney Houston classic I Have Nothing.

Harry singing 'I Have Nothing' on karaoke at a club in Tokyo, Japan – February 2 (via bobbyberk) pic.twitter.com/9a1RSzsQt7

The mini-series that the Queer Eye guys are currently filming will air for four episodes and will see the group intertwine with the country’s culture, while they transform the lives of four Japanese men and women from different cultures and backgrounds.

And fans of Harry Styles managed to raise over $30,000 for three separate LGBTQ organisations for his birthday. Money was raised for the Albert Kennedy Trust, Switchboard and Immigration Equality, a charity that helps LGBTQ and HIV-positive asylum seekers.

Commenting on the money raised, Grahame Robertson for the Albert Kennedy Trust said: “It’s amazing to see young people from across the spectrum reach out to support their peers.

“We’re grateful that fans of Harry and One Direction are recognising the important issue of LGBTQ+ youth homelessness and that young LGBTQ+ people are at risk of rejection from family simply because of who they are.

“It sends such a positive message that young people are very socially aware and extremely pro-active. We’re thrilled and extremely grateful that Harry’s fans are supporting AKT.”