Happily Ever Poofter fairytale goes from strength to strength 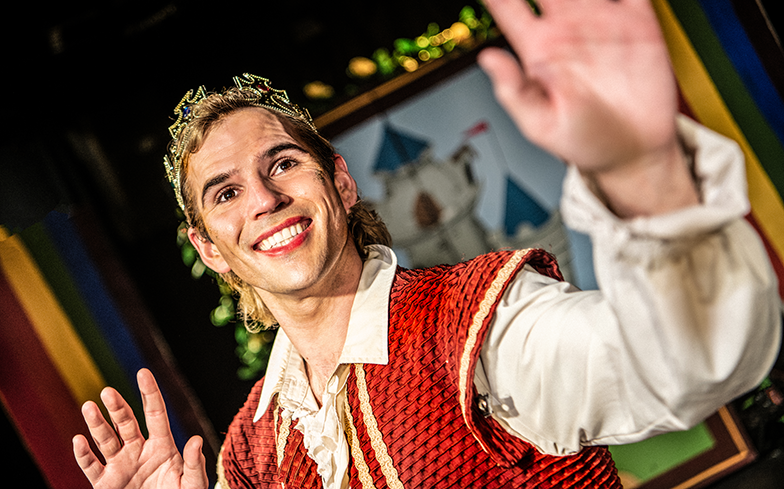 The Disney-inspired fairytale with a LGBTQ+ twist has returned to the King’s Head Theatre following shows at Above the Stag, the Royal Vauxhall Tavern and the Two Brewers.

You could be forgiven for not yet having encountered Happily Ever Poofter – it’s a relatively new show which made its debut a few short months ago. Premiering at the 2019 Edinburgh Fringe festival, it has had a couple of short runs in London prior to its current stint at the King’s Head Theatre, which has been timed to coincide with LGBT+ History Month. The show is written and performed by Rich Watkins, directed by Denholm Spurr and choreographed by Simone Murphy. GAY TIMES was invited to see it last year at Above the Stag and fans will be delighted to learn it’s still a wonderfully camp, lo-fi Disney parody.

The pretence is that Prince Henry is the only gay in the magical kingdom Far, Far Away. In his quest to find true love, his Fairy Godfather transports him to a bizarre new realm – London’s gay scene. Over the course of an hour he encounters a number of men – there is a running gag about the guys he meets – in the hope of finding the one and having his happily ever after. During the show Rich sings us some amusing pastiches of Disney classics such as “High Ho” and “O, I Just Came Out to the King”. Well, if Disney won’t give us a gay love story, why shouldn’t the queer theatre community make one instead?

The show is chock-full of enjoyable moments. It’s bursting with wit and hilarious one-liners; there are some fabulous costume reveals; there’s just the right amount of audience participation to create an atmosphere, without anyone feeling too uncomfortable; and the production values are knowingly and entertainingly low-budget. It’s all carried by Rich’s outrageously camp and flamboyant delivery, which he pokes at – after confessing to the audience that no-one in his kingdom knows he’s gay, he explains to us that the magic of theatre allows us to suspend our disbelief.

We had a wonderful night at the show and grabbed Rich for a quick chat afterwards. “I grew up loving fairy-tales and Disney movies. As a gay actor, my sexuality has come up at every venture in my career, so I decided to do something unashamedly gay, which was still accessible to any audience member. In 2016, I started writing parody lyrics to Disney songs… I sang them for my friends who said they were funny and remarkably good! I put all the pieces together, and decided to write a gay Disney parody – featuring all your favourite Disney songs! But more than that, it has a deep message of inclusivity, pride, love and joy.

“Happily Ever Poofter is for anyone who might have ever felt their story wasn’t shown in Disney or fairytales, whether that is because of their sexuality, their gender identity, the colour of their skin or the way their body looks. I want to inspire and empower audiences to take pride in their story, in their journey for true love, in their narrative – no matter how that looks. It isn’t just for those who love Disney, or who are gay. It truly is for anyone.”

It’s been a whirlwind year for Rich and the show, as he explains. “I wrote the whole show in about three weeks last February! I was originally planning on performing it as a one-off for my friends at the Royal Vauxhall Tavern – which I did last April. What followed was totally unexpected. Denholm and Simone – who had directed and choreographed the one-off performance – then helped me develop the show further, and by August we were at the Edinburgh Fringe Festival. To our surprise, we sold out every performance – no mean feat for Fringe virgins!

“Before we knew it, we were in talks with the King’s Head to transfer the show there, and had offers from Adelaide and Prague Fringe Festivals. To think that the show didn’t even exist this time last year is really quite bewildering, but we’re just enjoying the ride! Happily Ever Poofter has been described as an antidote to the challenging times we’re living through right now, and I believe the overwhelming response to the show speaks to that. While it doesn’t shy away from the difficulties currently facing the LGBTQ+ community, it has one goal: to spread joy. And seemingly, it’s working!”