Hannah Gadsby on Nanette, shitty hecklers, and the hard reality of queer visibility 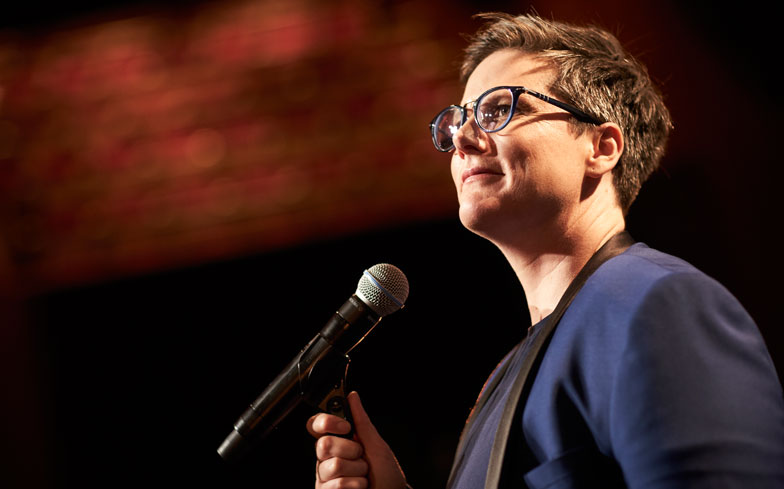 Hannah Gadsby has utterly failed in her most recent career move – to quit comedy.

In New York, a one month run was extended to four months. One performance, at the Sydney Opera House, was filmed for a special release on Netflix. It has since become a word-of-mouth phenomenon across the globe and has indisputably transformed Gadsby’s life: her stated intention was to quit comedy but, ironically, she is now one of the most talked about comics in the industry.

“I’m not really listening, if I’m absolutely honest,” she says of the huge response across social media. “I’m aware that it’s gone big. So apart from what I’m hearing in interviews, what my dad tells me from when he Googles – I am trying not to engage too much as I’m exhausted. It’s not really the state of mind I need to be in to process what’s happening.”

Related: Lizzo on being a proud LGBTQ ally and upcoming collab with Missy Elliott

If you have seen Nanette, you will understand why it must have been exhausting to perform every night. “Brutal!” Gadsby confirms, “it was brutal. Every time.” If you haven’t seen it, it is important to understand that Nanette is not a standard comedy routine. In fact, it is hotly contested in some quarters whether it ought to be considered comedy at all.

Gadsby, a 40 year old lesbian who grew up in a small town in the Bible-belt of Tasmania – where homosexuality was still illegal until 1997 – certainly begins the show as you’d expect. There are light quips about her sexuality that to LGBTQ audience members might feel familiar, even staid. It’s gently amusing but feels like something you could have seen and heard twenty years ago – when Ellen DeGeneres came out and won the affection of straight audiences by beguiling them with a particular brand of placatory, ditzy comedy. Gadsby finds the Pride flag “a bit busy”, she jovially remarks that she “forgot to come out to Grandma”, she recounts how a stranger on Facebook sent her a message urging her to come out as transgender. “I don’t identify as transgender,” she explains. “I identify as tired.” Yet from this starting point, Gadsby starts to change gear and Nanette quickly and unnervingly becomes an intricate deconstruction of the conventions of comedy itself before becoming a harrowing examination of the traumas of homophobia, misogyny and sexual abuse. Gadsby concedes that the unpredictable journey she takes her audience on is “extremely manipulative”.

In Nanette, Gadsby engages her knowledge of art history (which she studied at university) and opines that “artists don’t invent the zeitgeist, they respond to it.” Her words are oddly prophetic: while in the middle of the show’s run, the Harvey Weinstein story broke and the #MeToo movement began. Women across the world began telling their own stories of sexual abuse on social media just as Gadsby had been doing on stage. “It was like the world caught up with my fury,” she tells me. “But I didn’t have to rewrite a thing. I think there must have been something in the air – I was part of a much larger pattern of frustration and fury.”

On stage, Gadbsy rages against a culture that has, for centuries, protected powerful men’s reputations at the expense of those they have victimised. It is clear that Nanette will forever be mentioned in the same breath as #MeToo. Yet some of the criticism of the latter is that it became a theatre of women’s trauma and the usefulness of that outpouring in changing things remains to be seen. “Me Too isn’t over,” Gadsby tells me. “It had to be a sledge hammer but the space it’s opened up allows us to have more thoughtful and nuanced conversations.” She feels the same way about her own contribution: “I’m glad the show has started a larger conversation. I guess you could say I’m proud of it.”

Gadsby’s willingness to share her vulnerability has not insulated her from all criticism – either on stage or in reviews. She was heckled, a few times, she says. It was always by men. In one instance – well documented on Twitter by other audience members – she calmly asked theatre staff to remove the man and said his ticket funds would be donated to a survivors’ charity. But Gadsby insists she didn’t always respond “like a calm little Buddha” either.

“The worst heckler was in London,” she recalls. “There was a bloke who’d had enough. I’d just revealed a vulnerable truth and he just broke the silence, broke the tension and shouted ‘this is bullshit!’ and I did not respond calmly.” Gadsby admits that, performing in Soho, she was caught off guard and lost her temper. “You just don’t expect it in London. London passes itself as one of the best, don’t you?” she asks me with a wry laugh. I agree that it is surprising and ask how such an unpleasant intrusion made her feel. She is unequivocal: “It felt like violence to me. I felt it was an act of violence at that point. So I didn’t respond like calmly, I’ll give you that for nothing!” she says, with a devilish and slightly triumphant tone. “I tore him a new arsehole.”

Not all of Gadsby’s critics are misogynist or otherwise entitled hecklers, however. Some critics and fellow comedians have more thoughtfully questioned her deconstruction of comedy – either because it pulls back the curtain on their artform or because it dismisses a longer heritage of queer humour. “I have built a career out of self-deprecating humor, and I don’t want to do that anymore,” she says on stage. “Because do you understand what self-deprecation means from somebody who’s already exists in the margins? It’s not humility. It’s humiliation.” For some, this exposition of how many gay comics have traditionally lampooned themselves to relieve the tension caused by societal homophobia is revelatory. For others, it’s possibly a betrayal – casting aspersions on a beloved coping mechanism. Jokes may sublimate horrible experiences but they don’t have a moral or easy takeaway for the audience – they release tension but they can also be ambiguous, unsettling and anarchic. Is there a risk of throwing the baby out with the bath water?

“There’s a difference between using it as a coping mechanism, as a survival tactic, which many of us in the older generation had to do and it crossing over into perpetuating a damaging self image for younger queer people,” Gadsby insists. “There needs to be a bit of a reassessing. It’s kind of a painful thing to do. But necessary.” But what of Gadsby’s unease with self-deprecation? Despite her disavowal of it in Nanette, it still laces her interactions – when I ask her what she is doing next, for example, she coyly refers to her forthcoming book as “a bit of a memoir situation”. Is she really so down on a tool which, if nothing else, provides an antidote to our society’s obsession with self promotion?

“There absolutely is a place for it and the higher my profile the more important it is for me to indulge in it. But what was important was that I showed my power as well. Self deprecation from a place of disempowerment is incredibly self destructive. But when it’s in a position of power – it’s incredibly important to be mindful of your shortcomings,” she suggests.

Related: Carlie Hanson on her sexuality, struggles with mental health and touring with Troye Sivan

Gadsby’s issue with on stage self-deprecation is what it says about the power dynamics of society itself: “If there was an equal playing field in the world there would be no issue. My issue is that the comedy stage is not egalitarian because the world isn’t. So the farther you are from the Human Neutral, which we will call Straight White Man, the harder you have to work for a punchline. You have to work harder to be things that straight white men do not have to make an effort to be. So how you do that is up to you. The best way – especially if you want people to laugh – is to put yourself down and that is the issue.”

So, for Hannah Gadsby, it seems that self-deprecation isn’t the problem in itself. It’s who is required to do it and when. “I want all straight white males to become self deprecating right now,” she says. “The more privilege you have, the more you are obliged.” And Gadsby includes herself in this: “I’ve told my story now. I’ve been granted visibility in the world courtesy of this show – I now have a privileged position. So I can take the piss out of myself as an individual. But I won’t do it as a representative of marginalised people.”

More information on Netflix’s Nanette can be found here.