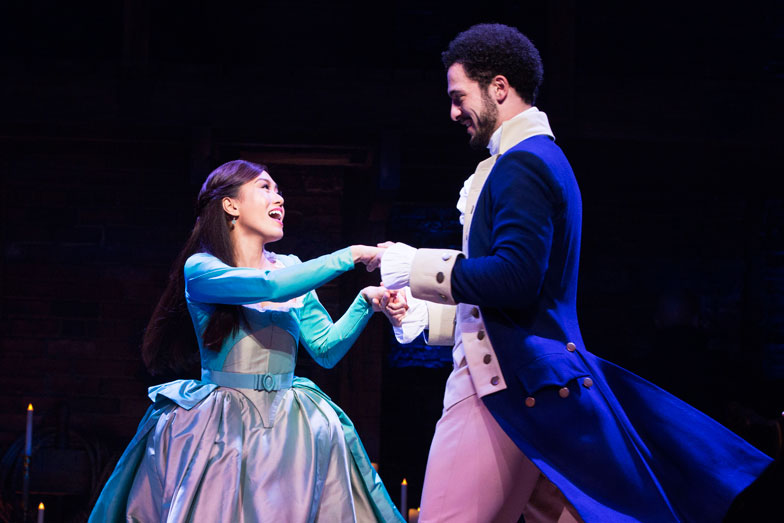 As one of the most successful and critically acclaimed pieces of theatre in America, Hamilton has now arrived into London’s West End with hopes almost as great as the waiting list to see the show – and what a show it is!

Housed inside the wonderfully refurbished Victoria Palace Theatre, the all-new American musical marks the great success of Alexander Hamilton – one of the Founding Fathers of the United States. But don’t worry if you, like us, know nothing of him beyond the title of this show, as Lin-Manuel Miranda’s storytelling will explain all through the most ideal songs and movement.

With little spoken dialogue featured, Hamilton is a wonderment for the eyes and ears as you mix through song and some impressive rapping skills to tell of the American figurehead. Add in some nifty dance moves and stunning costume (Paul Tazewell) and scenic (David Korins) and lighting (Howell Binkley) designs and it all soon clicks to why this show was rightly awarded a record-breaking number of Tony Awards.

Jamael Westman undertakes the title role of Hamilton and oozes with the charm and conviction of a man with a goal. A man that, throughout his troubles and eventual decline, pushes his right to demand more and make change. Added to this is his battling with eventual wife Eliza Hamilton – played by the vocally strong and delightful adorably Rachelle Ann Go.

Not the only leading lady of the piece, her fellow Schuyler sisters serve up the sass in a three-way that’s sure to have you bopping in your seat with their number – perfectly titled Schuyler Sisters. Call it the flowing and colourful gowns or the united sense of female empowerment that caught us lapping up their time on stage. Rachel John’s take on Angelica Schuyler of equal success as Rachelle; a vocal prowess that’s sure to dive into your heart in her reversing and retold number Satisfied – and satisfied we were.

Principally narrated character Aaron Burr, Giles Terera moulds this story together well as he and Hamilton eventually dual in a rivalry that becomes ever-toxic as the almost three hours of this show progress. Michael Jibson’s pompous and utterly ridiculous take on King George a total opposite to most of what we see before – and to much delight. This lighter but still ideally delivered British narrative come insides this all-American tale, including his cracking delivery of song You’ll Be Back.

Obioma Ugoala thunders with charm as George Washington with Jason Pennycooke as the equally brilliant Marquis de Lafayette and Thomas Jefferson. But in a story so detailed and a cast of varying characters, Hamilton is an ensemble piece that thrives on the success of teamwork. Its commitment to ensuring diversity across its casting worthy of its own mention here – something we’d love to see reflected across the West End.

However brilliant this cast are, and they sure are that, its the direction of Thomas Kail – and choreography of Andy Blankenbuehler – that speaks to your heart. Its the consumption of a story that could so easily become confusing, but doesn’t. It’s the breaking of any rules that have come before and carving a new direction. And when layered with Lin-Manuel Miranda’s practically perfect score, there’s little stopping you from rising to your feet as you wipe away tears of a finale that packs an almighty punch. We will, to be fair to those going, leave the details of how and why out, but it’s a shift that we certainly didn’t see coming.

Last year it was Harry Potter and the Cursed Child and this year it was Angels in America: 2018 belongs to Hamilton. The genius of this show isn’t exaggerated by the hype nor the international acclaim. In 20 years time, we will speak of this piece of art in a way we once did of Les Miserables and Wicked. It’s a game-changer and one that will leave you questioning how it was ever conceived around the story of an American Founding Father.

Hamilton will pierce your heart in one pulsating beat of perfection – leaving audience and Eliza both longing for one more moment with the man synonymous with the room where it happens. Don’t throw away your shot: go see this remarkable show and forever live in the wonders of Alexander Hamilton. Rise up!

More information on Hamilton can be found here.