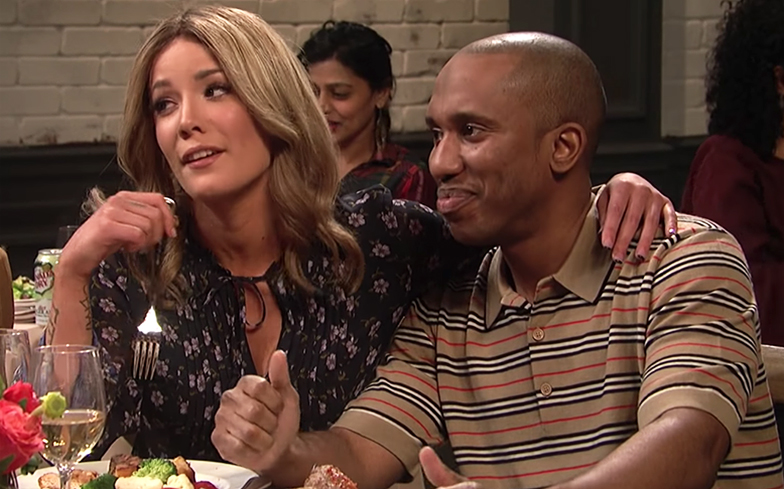 Halsey poked fun at OnlyFans on a recent episode of Saturday Night Live.

Over the weekend, the singer-songwriter was a guest star on the late night comedy show, and one hilarious skit saw a family learn of their father’s new “small business” making money on an adult subscription service.

When the recently-laid-off patriarch, played by Kenan Thompson, is recognised by a “really big fan” during a fancy dinner, the family are curious how he knows him, and also how he’s affording the meal.

That’s when he informs them of his “new side gig” on CamFansOnly, clearly a parody of websites like OnlyFans and JustForFans.

“Sir, I don’t think you’re thinking about the right thing,” Halsey says. “CamFansOnly is for thirsty gays who spread their butt cheeks online for like $10 a month.”

“Yeah, that’s the one,” he replies. “That site makes me feel beautiful and in control of my body.”

While his family are shocked at the reveal, his wife urges their kids to be “more supportive” once she realises just how much money he’s making from the website – and that he’s been named “featured performer” on the website’s homepage.

“You know what? I was quick to judge, Mr Henderson, but you’re glowing,” says Halsey.

Watch the skit below.

Last year, the singer, who is proudly bisexual, called out homophobic viewers who didn’t like her performance of Without Me on The Voice US.

For the evocative performance, which many fans are calling the best of her career, she enlisted the help of dancer Jade Chynoweth to play her lover, and the two women delivered passionate choreography to accompany the song.

While it was great to see a portrayal of same-sex love on such a huge platform, not everyone was happy with the performance, with some labelling it “disgusting”. But true to form, Halsey didn’t take the homophobic backlash lying down.

“I’m very proud of the emotional performance I did with Jade Chynoweth on The Voice tonight,” she wrote on Twitter. “And also very proud to have pissed off the homophobic viewers at home who missed the message. Thanks for watching.”